What are the relative heights of mountain ranges in Middle Earth? And how would they compare to our modern world? I tend to imagine that after the First Age, the highest ranges were the White Mountains and Misty Mountains, comparable to the Rockies or Alps. I imagine that the Ephel Duath were smaller and not so wide because Frodo and Sam were able to get across relatively quickly, including time to battle Shelob, get capture and escape from Orcs, while in a weakened state. I imagine the Ephel Duath to be around the height of the White Mountains or Green Mountains of New England. Does Tolkien provide information about the height and breadth of his mountain ranges? Bonus points for the ranges of Beleriand!

In The Atlas of Middle-earth, Karen Wynn Fonstad uses her knowledge of cartography to estimate many details of the geography of Middle-earth. To do this, she uses the maps drawn by Tolkien as well as clues from the text of the books. Here are some of her conclusions related to mountain ranges.

The Misty Mountains are 900 miles from north to south and are about 12,000 feet high.

THE TOWERING MOUNTAINS OF MIST were undoubtedly one of the most important features in Middle-earth. It is quite likely that they, as well as the White Mountains, were inspired by the European Alps, in which Tolkien had hiked in 1911. The Hithaeglir, raised by Melkor early in the First Age as a hindrance to the riding of Oromë, were a barrier to early westward migrations and to the quests of both Bilbo and Frodo. The north-south orientation of some 900 miles would also have blocked the predominating moist winds from the west. The orographic lifting, possibly to as high as 12,000 feet, would have produced the cloudy conditions that not only gave the range its name, but that were more locally important in naming Fanuidhol (Cloudyhead), and especially in producing the tremendous thunder-battle from which Thorin and Company sought shelter.

In The Hobbit, the dwarves travel about 30 miles from the goblins' "front porch" in the west to the back door in the east. As they were travelling in a northwesterly direction, the width of the mountain range must have been about 20 miles at this point. 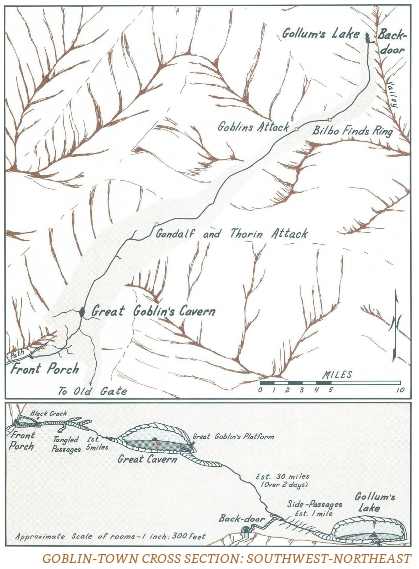 The White Mountains are 600 miles from west to east and are more than 12,000 feet high.

THE SECOND MAJOR RANGE of mountains spanned some 600 miles, west to east. The White Mountains were present in the First Age1 and were quite likely raised at the same time as the Towers of Mist. Their northern arm even appeared to be an extension of that north-south range, merely eroded away at the Gap of Rohan. ... Many other portions of the White Mountains must also have been as high as most of the Misty Mountains, or higher, in order to remain snowcapped at the more southerly latitude.

Around them the peaks rose high above, but were apparently lower than those of the White and Misty Mountains. No mention was made of snow, although “forgotten winters had gnawed and carved the sunless stone.” Still, the peaks were probably quite high, for the top of the pass of Cirith Ungol was more than 3000 feet above the Cross-roads.

Putting this all together, I estimate that the pass of Cirith Ungol is no more than 4,000 feet above sea level (assumes that the cross-roads are less than 1,000 feet above sea level) and the peaks of the Ephel Dúath are between 6,000 and 9,000 feet high (higher than Cirith Ungul but low enough not to be snow-capped). From Tolkien's maps, I estimate that the Ephel Dúath stretched 400-500 miles from north to south.

Udûn is the circular valley behind the Black gate. Karen Wynn Fonstad points out that it could have been created by the explosion of a huge volcano, but such a volcano would have to have been 29,000 feet high. She also estimates that Mount Doom is 7 miles across and 4,500 feet high.

At the north end of the Ephel Dúath, at its junction with the Ered Lithui, lay a deep circular valley ringed by sheer black barren cliffs—Udûn. Tolkien described the vale as being encircled by arms sent out by the two ranges. The symmetry of the valley suggests either a caldera or a ring-dike. A caldera is the remnant of a volcano that has exploded and/or collapsed. A ring-dike is a circular ridge of cooled igneous rock surrounding a deep valley. It occurs when a round block subsides into an underlying magma chamber and the fluid magma is forced up around the edges. Often the upwelling is intermittent, leaving passes such as the Isenmouthe and Cirith Gorgor. Either process could have resulted in the feature shown by Tolkien, although compared with our world either would have been gigantic. Imagine the original height of a volcano with a forty-five-mile base. This colossus would have towered almost 29,000 feet! In contrast Mt. Doom was only seven miles across and stood 4500 feet. 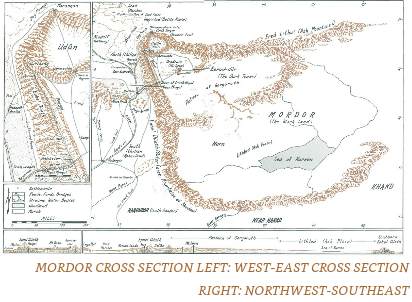