2000s(?) TV show with 4 kids as the 4 elements who fought baddies in another universe

I’m from the UK and I watched a TV show from around 2011-13 which featured 4 kids as the 4 elements. The girl represented air, the darker skinned boy represented earth, and the other two boys represented fire and water.

They had to go out and fight baddies in another universe (I think) and they got there by jumping through a well portal thing. They would transform into a creature based on their element. In each episode, there would always be one of them that wasn’t needed and they would control what happened from back home.

Gormiti: the Lords of Nature Return! (2008)? It was asked earlier this week and seems like a match...

An episodic series fron Marathon Studio [...] narrating the adventures of a group of young children with the duty of keeping the peace in the parallel universe of Gorm, once home to a mighty race of warriors. Not an insignificant task, indeed, since events on Gorm tend to have repercussions on the Earth itself... and the villains of the show, the people of the Volcano, seem to be intent on causing as much of a ruckus as possible!

By calling the power of the ancient warriors, siblings Toby and Nick and their friends Lucas and Jessica can transform in Lords of Nature, gifted with the powers of (respectively) Water, Earth, Forest and Air, and fight against the people of the Volcano and their leaders, Orrore Profondo (Deep Horror), Lavion and Magmion. Episodes mostly revolve around the four kids balancing their superhero duty with real life, school and everyday activities... with the interesting variation that, in every mission, one of them (apparently selected at random) has to stay behind, in order to manage his/her friends' powers and give them instructions.

The poster has characters fitting your description: Jessica, Nick, Lucas and Toby are Lords of (respectively) Air, Earth, Forest and Sea. No fire boy in the main crew, but the members of the Lava Tribe are the main antagonists.

Lucas is the dark-skinned one, and as said above his "element" is Forest (not Earth); but the concepts are similar, I guess, so you might have misremembered. 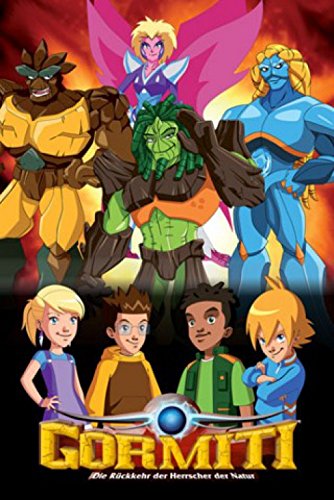 The credits show the kids and their transformations.

Found by memory, having answered for Show about 5 teens who all have elemental powers and turn into different humanoid creatures with that same show earlier this week.

12
Movie in which water is imported from past
7
1990s era movie about people tranforming into bird-like creatures?
7
Trying to locate a Netflix Kids TV series with alien girl. Show was called "Near Zero"(?)
5
What is the name of the anime kids, mecha and fantasy series with a group of 4?
9
Show about 5 teens who all have elemental powers and turn into different humanoid creatures
3
Old puppet kids show about a hot air balloon going to another dimension