Why did Luke use his left hand to shoot?

In A New Hope Detention Center Shoutout scene Luke is clearly shooting with his left hand. Later in this same video at 4:51 he makes a leftie shot more clearly.

In The Empire Strikes Back while following Boba Fett, Luke holds a gun (and subsequently shoots) with his right hand. Needless to say, while fighting with a lightsaber he also uses his right hand. 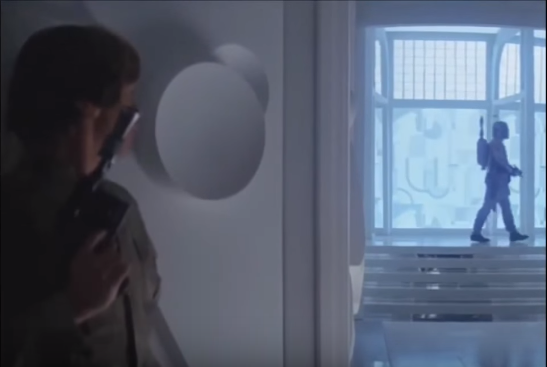 So why did he shoot with his left hand in A New Hope?

Luke is pretty consistently shown to be ambidextrous (having the ability to use both hands without favouring one) throughout the original trilogy film series.

In A New Hope he totes a gun and shoots with his left hand while on the Death Star. 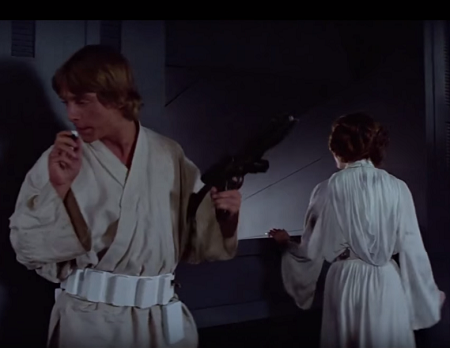 He operates a control panel with his right hand 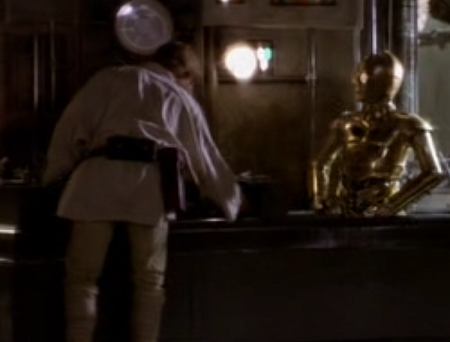 He ladles food onto his plate with his left and then passes a heavy jug from his right hand to his left to pour. 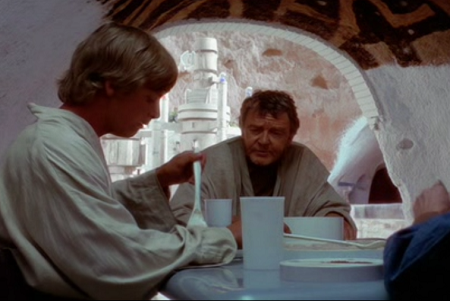 He uses a screwdriver with his right hand. 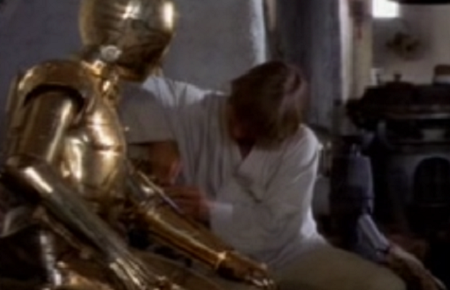 He handles the lightsaber with his right hand. 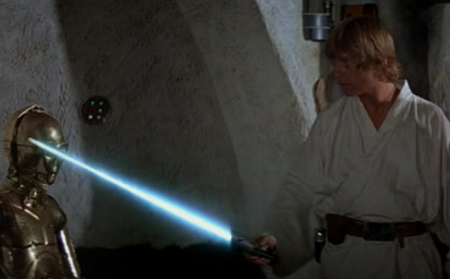 He favours his right hand for throwing a grenade in Empire Strikes Back. 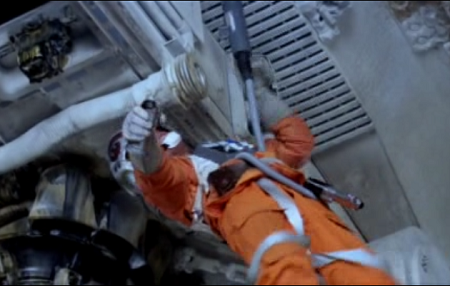 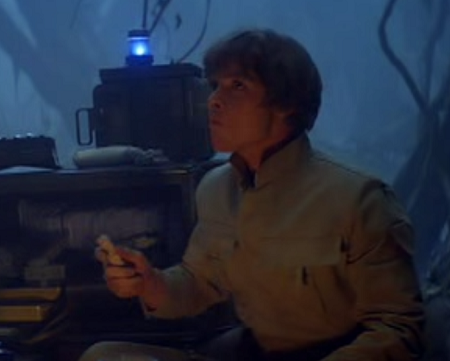 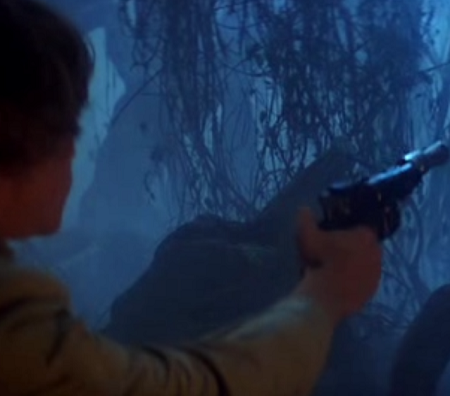 But then eats with his left hand a few minutes later. 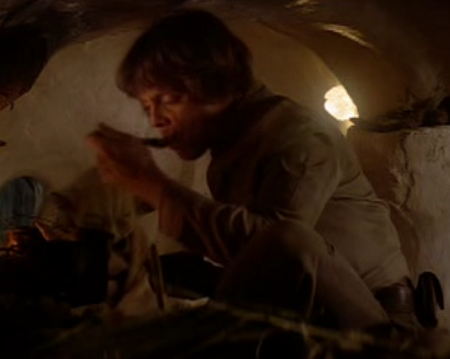 He favours his right hand for reaching out with the Force. 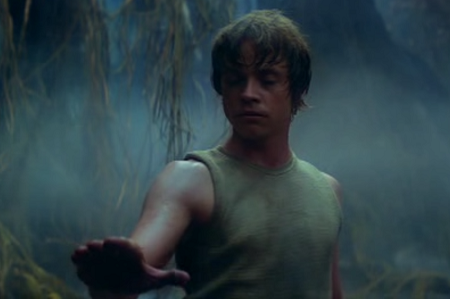 He totes his gun in his right hand on Cloud City. 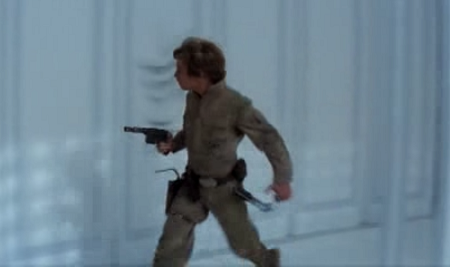 He throws a skull with his left hand in Return of the Jedi.

He salutes Jabba and catches his lightsaber with left hand.

He calls the lightsaber to his right hand and fights almost exclusively with his right.

It's not clear if this was an intentional directorial choice, a goof (reversed plates meant that Fett's antenna swapped sides repeatedly during the Skiff scene and Luke's lightsaber would repeatedly jump from his left to his right hip, for example) or whether Lucas simply didn't notice or care that his main actor (who's left-handed in real life) was using his hands interchangeably.

During the Detention Centre shootout, Luke is taking cover on the right-hand side of the corridor (from his perspective) and the alcove he's using for cover would make it harder to fire his blaster right-handed. He's trying to stay behind that little bit of bulkhead as much as he can to avoid the incoming Stormtrooper fire, so holding the blaster in his right hand would mean having to lean farther out to get a shot off and making himself more of a target.

In Cloud City, you can see that Luke's hiding behind a wall at a left-hand turn (his perspective), so naturally he wouldn't need to shift his sidearm to another hand since he'd still be in cover if he decided to lean out and shoot at Fett and the Imperials.

EDIT: Several comments have indicated that Mark Hamill is left-handed, while I've also seen that Luke may be intended to be ambidextrous with a preference for one hand or the other depending on the action. But in terms of in-universe actions, Luke's simply taking best advantage of his cover the same way that Han and Chewie are shoving themselves up against the wall in the Detention Centre. As a side note, you'll sometimes see Stormtroopers carrying their blaster rifles left-handed; this was because the Sterling submachine guns used for the blank-fire props have a VERY awkward horizontal magazine that sticks out of the left side of the gun and makes it difficult to hold in the typical "Stormtrooper Ready" position, even with a chopped-down 10-shot magazine.

Valorum's answer ably points out the ambiguity of Mark Hamill's ambidextrousness. This could be caused by:

As a left-handed person myself, who has some shooting experience with hand-guns and rifles, I can say with some certainty that left/right handedness doesn't always correlate to which hand you hold the weapon in. When I hold weapons, my right hand is the trigger-holding hand, and my left is the support hand. For racquet sports, I'm fully left-handed as there's no dependency on eye dominance.

I am left handed, but right eye dominant. There's various aspects of this eye dominance that come into play when shooting

Most adult men have one eye that directs their pointing, right-handers tending to have a dominant right eye and the bulk of southpaws a dominant left. When they point at a distant object with both eyes open, they will line up with one eye rather than the other. The dominant eye, the fingertip, and the selected mark, will all be points on a straight line. Shooting is easier and has more effect if you can shoot with both eyes open.

Binocular vision facilitates the estimation of distance, speed and angle and helps one to gain the full benefits of natural hand to eye co-ordination. If you doubt it, try catching a ball with one eye shut. But, do not believe those who say simplistically that everyone should shoot with two eyes. It’s not as simple as that.

Stormtroopers obviously suffer from any one of the last three variants of eye-dominance.

Not the answer you're looking for? Browse other questions tagged star-wars a-new-hope the-empire-strikes-back or ask your own question.

16
Does a lightsaber have a cauterizing effect when cutting off appendages, or not?
25
Is there a script that contains Chewbacca's/Peter Mayhew's dialogue (in English)?
12
Elements of The Force in A New Hope
23
When and how does the Emperor learn that Luke is Vader's son?
13
Why doesn't Finn just use the Falcon's other cannon?
12
Who first had the idea to help destroy the Death Star - Chewbacca or Han?
5
Is there any evidence to suggest that Aunt Beru and Uncle Owen were killed by Boba Fett and not the Storm Troopers?
38
Why did Luke leave Owen and Beru's remains?
13
Where was the attacking boat?