A fantasy book with seven white haired women on the cover

I know it’s vague and I don't expect anyone to know this, but I had a friend who owned a fantasy book with seven white haired women on the cover. I think each woman had their own brief story chapter, as it was a very thick book.

Unfortunately I don’t know who wrote it, the title or remember what it's about. I'm bothered that I can’t find this book by Googling it either, possibly because it's an older (maybe mid to end of 90's to early 2000's) book.

The few things I do remember is one of the women was a knight of sorts, one was a ghost. I think one also might have been a sorceress. I know I'd know it by its cover.

That is likely Silverfall, a Forgotten Realms book about the Seven Sisters.

The sisters are epic level characters (characters possessing nearly super-human levels of skill and power) of differing abilities, most of which involve some form of spellcasting and use of magic. Created by Ed Greenwood, they have been featured in multiple novels, games, and officially created scenarios by an equally large number of authors/game-designers.

From the descriptions of the 3 oldest sisters (emphases mine):

Syluné Slain by a red dragon, she remains as a ghostly spectral harpist...

Alustriel Silverhand She shares the silver hair that is a trademark of the Seven Sisters.

Dove Falconhand She is a renowned Knight of Myth Drannor...

You can see the cover below with Syluné, the ghostly sister, visible floating and transparent in the center: 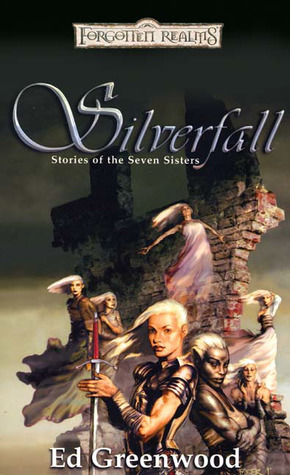 3
Novel about a young woman, and the doctor who mistakes her for a poltergeist
9
Book with male protagonist struggling against giant (possibly alien) bugs
8
YA sci-fi/fantasy/horror book about a kid that has to overcome a lot of trials
5
Fantasy book, group of women meets group of (mercenaries?) men, has a shipwreck scene
7
Child's picture book; fantasy story with a green lizard in human clothes
11
Help finding a sci-fi book with a small space ship