This is a repost with additional info of an older question that was never answered. I have stumbled upon this old question while also trying to find the name of the book series myself, as I dearly wish to read it again but for the life of me, I can't remember the name of it.

The original question was never correctly answered, so I'm posting again to see if anyone can remember.

Books that were ruled out in original post: Eden's Gate & Heir Apparent.

The series is called Finn's Quest by Eirlys Hunter, and the first book is called The Queen-Seekers (2000).

This is the original cover of the first book. It appears to be a first-person view through a rocky tunnel, apparently a dungeon, with torches and the hand of the viewpoint character in the foreground holding a staff or wand.

The main character, Finn, starts to play a computer game called "The Ultimate Adventure" and ends up sucked into the computer world where he is sent on a quest in a land called "Coralia."

The back cover blurb reads:

Finn's life takes on an unreal twist when he finds himself actually in a computer game world. It's a world at war, a world of magic and evil, in which someone wants Finn dead. With Gala, a girl who's addicted to risk-taking, he begins his dangerous but exciting journey through a land where all the rules are different.

The "game" can definitely have effects in the real-world; in the second book, Coldkeep Castle (2001) his father is kidnapped into the game and Finn must re-enter the game to rescue him.

I've found a higher-resolution image of the 2nd book's cover; you can definitely see that it appears to be computer-rendered image. (Complete with a highly-unrealistic hand holding a staff.) 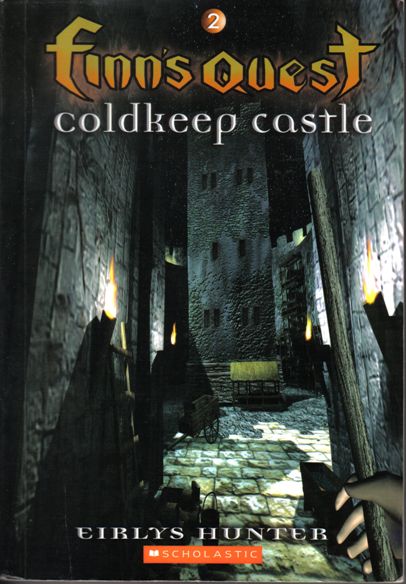 Drawn into Xanth by a harmless-looking computer game, two young people find themselves competing for a precious prize: Dug, who is beguiled by a beautiful serpent-princess, and Kim, who discovers her favorite fantasy realm has suddenly become frighteningly real.

In a desperate race against time, Dug and Kim battle their way across the wondrous, perilous land of Xanth, testing their courage against dozens of fearsome obstacles (and their wits against a host of outrageous puns!) But when treachery, danger, and deceit place Xanth itself in peril, Dug and Kim learn that some things are more important than winning or losing.