Manga about a guy about to suicide making a deal with a demon, he gets rich but one of the demon's daughters will eat his heart after a year

I'm trying to find a short manga I read some time ago but I can't remember the title. It's about 20 chapters long.

There is this boy who is bullied and is about to commit suicide jumping from a building, but a demon lord or something like that stops him and offers him a deal. The demon will give his family much much money to make their lives better, in exchange the boy has to keep living for a year, but during that year some sort of power will be growing in his heart, when the year ends one of the demon's daughters will eat his heart and become very powerful.

The two daughters start living with the boy the next day to protect him from other demons/monsters trying to steal his heart.

Weak, bullied and pessimistic about life, that's Setsuna Kashiwagi. On the verge of jumping off a bridge, a mysterious man appears behind him and offers the contract "10 million yen in exchange for your life in a year." Skeptical at first, he accepts. Waking up the next morning, thinking it was an dream, he notices 2 beautiful women sitting beside him, they are Kanna and Rena Kurohime, demon princesses here to claim his heart in a year. 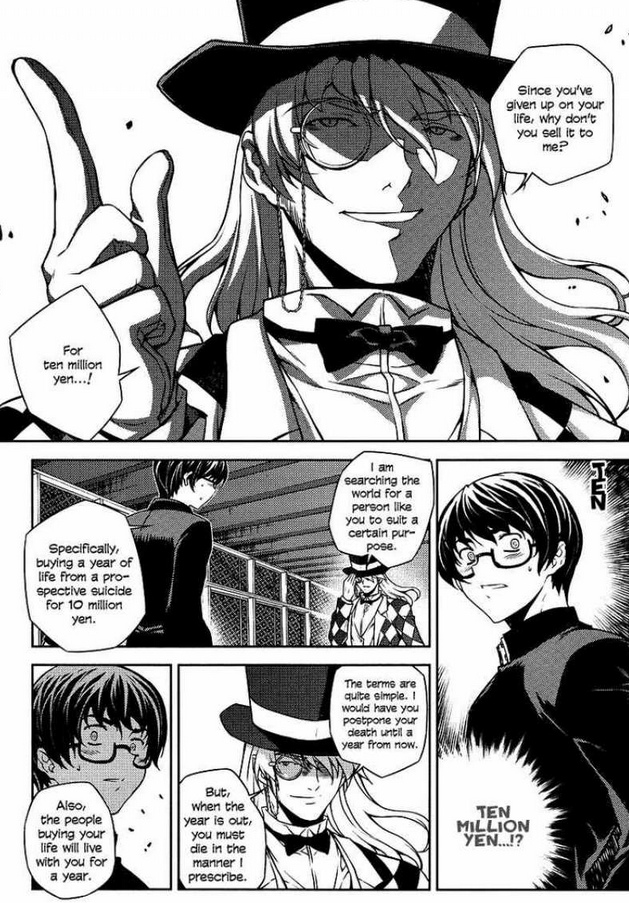 Found with the Google query manga suicide pact daughter "eat his heart" "a year" which returned this forum thread (although it matched the query because someone was talking about Akuma ni Chic x Hack, which was another possibility - a demoness, daughter of someone important, was to eat a depressed guy's heart there too).

7
Which book? Flatworld? Otherworld? Beastiality, necrophilia, elves/demons
62
A cynical demon writing annotations into the book for puny human readers
11
Book about a dinosaur loving boy accidentally summoning a cat-fearing devil
2
Manga with a boy whose father was murdered (but is still around), living with a demon girl with magic hair
4
Manga where a partially artificial guy is put into stasis and wakes up in a future with magic
7
Sad oneshot manga where a man helps a woman commit suicide again and again because she keeps coming back to life
3
Manga about a hero who was fired/kicked out of his party for being too cruel
2
A boy summons an overpowered demon as a companion (I think )
5
Manga about a member of a sect, whose leader is from a sect that was destroyed