I read a story in a sci-fi magazine anthology in the early '80s about a "primitive" culture on some faraway planet. The story started with a young boy practicing fighting in a group of other young boys, each armed with a wooden stick and shield, wearing loincloths and painting the picture of your standard low-tech backwater primitive culture.

Later, the planet is invaded by what we would think of as standard Terran Marines with armor and laser guns, and that same boy is now grown and fighting back in guerrilla warfare in the jungle with the rest of his people. Now they use high-tech shields that absorb the laser fire and use the energy to power their lances, which are a sort of combination of lightsabers and point-to-shoot wands.

I don't remember getting the impression that they were given any technology, I think the overall moral of the story was that they were never really primitives at all. They could have used this technology at any time, but chose to live as simply as the demands of their surroundings necessitated, and only began implementing it to counter the invaders.

There was some illustration with the story that showed the shields being transparent and a cable leading from the shields and wands to a backpack power storage.

Like two of the commenters, I am fairly confident that this is “The Jaren” by Frederick Longbeard (also known as Barry B. Longyear), a novella first published in Asimov’s SF Adventure Magazine in the Fall 1979 issue. This issue is available at archive.org. Many of the details match this story precisely, but at the same time there are a few minor discrepancies.

The story deals with the reminiscences of an ancient warrior called Eeola, a member of an alien race called the Shikazu. They were a proud warrior race, and ruled an empire of nine worlds, but ran into conflict with the expanding human empire, and were conquered and subsequently degenerated. A recurring theme within the story, however, is that the Shikazu never accept defeat: “We can be killed but we can never be conquered. We are Shikazu.”

The story started with a young boy practicing fighting in a group of other young boys, each armed with a wooden stick and shield, wearing loincloths and painting the picture of your standard low-tech backwater primitive culture.

Eeola came from a jungle village, which fits with the primitive culture recalled by the OP. As part of their training they fought with “wands” and shields. At practice “the wands were at low energy output, [but] a burst or slash on naked skin would blister it”. They would also wear the be, a type of loincloth, before receiving the full dress (or nabe) at a ceremony when they became adults. However, we in the story we are also shown towns and cities, and after all, they rule an interstellar empire. On the whole the degree of technology seems quite equal between the Shikazu and the Humans, and the conflict seems to be on quite equal terms.

Now they use high-tech shields that absorb the laser fire and use the energy to power their lances, which are a sort of combination of lightsabers and point-to-shoot wands.

During advanced military training , the Shikazu were issued with upgraded wands (presumably special military grade armaments) that could “slice metal as a hot dagger slices cheese” and shields which could absorb almost any kind of energy and convert it to power the wand. They are also issued with a type of “powered armor” called jump racks - “With them we could run great distances at high speeds carrying heavy weights, or jump to incredible heights, or down from such heights with the rack absorbing the shocks”. The human forces are not described in detail, but use energy weapons, emitting energy as red beams. Rather than Eeola’s planet being invaded by Terrans, however, he and his friends form part of an army with the aim of retaking one of the Shikazu worlds that had fallen to the Humans.

There was some illustration with the story that showed the shields being transparent and a cable leading from the shields and wands to a backpack power storage.

The military grade shields are described as “almost transparent nets… connected to the power supply [of the jump rack]”. The illustration from the magazine fits the OP’s description excellently. 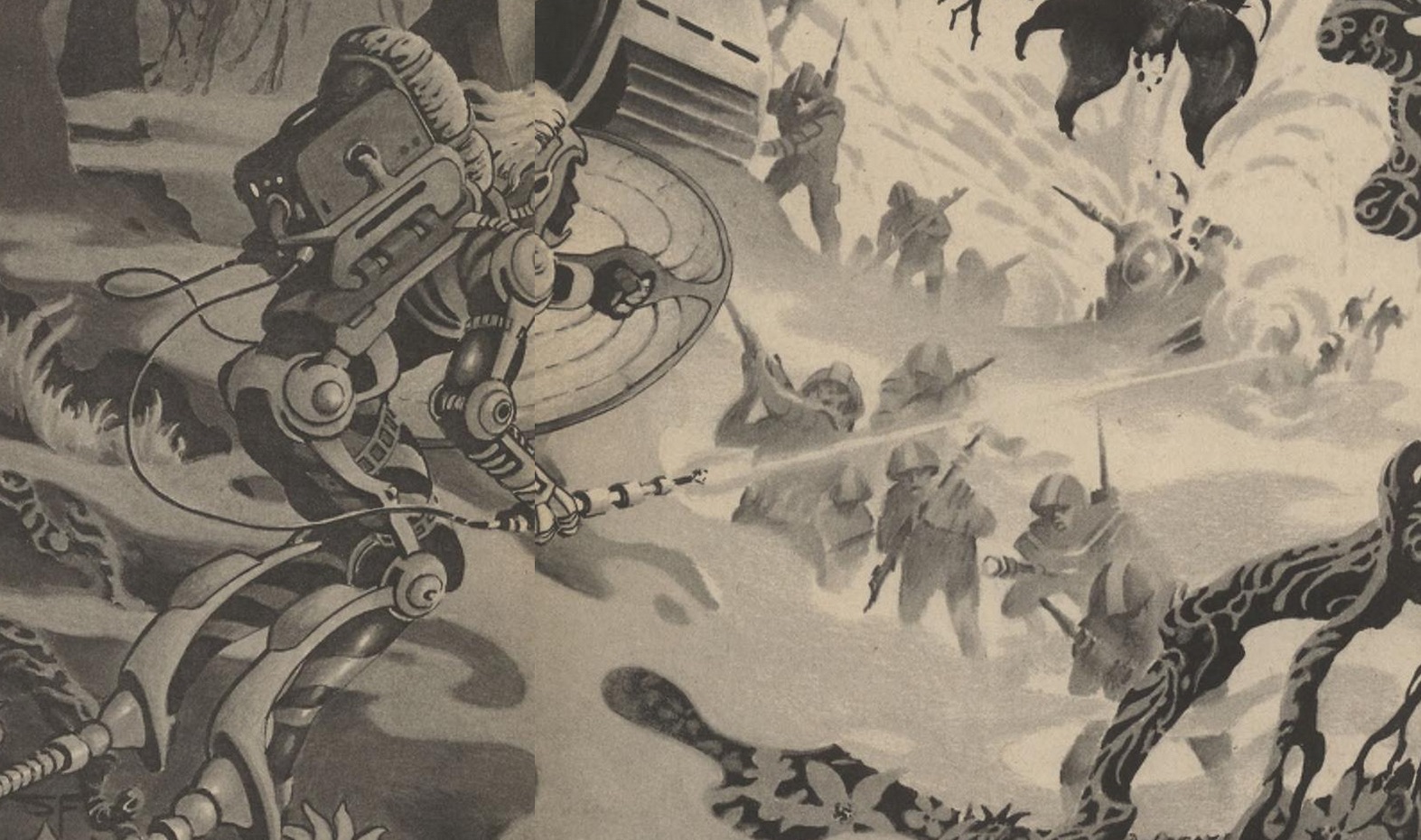 Not the answer you're looking for? Browse other questions tagged story-identification short-stories aliens anthology-book or ask your own question.