This is a cartoon I remember seeing an episode of as a preview on a VHS tape in the early 2000s. The VHS may have been of The Wizard of Oz if that helps, but I can't be sure.

In it, the protagonist is a character with a removable jack-o'-lantern for a head (he could still talk even if it was removed from his body) and I believe he has to steal/recover gold from the antagonist who may have been a headless horseman. There was a general supernatural feel about the story's setting, and I'm sure there were other fantasy characters (a witch possibly?). It was for children though, so not anything sinister or too scary.

Just to be clear, I don't think this cartoon had anything to do with the feature film it preceded, although I was a child at the time so I may be incorrect. On the same VHS I'm sure there was also an episode of the old Pink Panther cartoons in the previews, so this cartoon I'm searching for doesn't necessarily have to be about The Wizard of Oz. To summarise some comments I've made in the question, I'm quite sure this cartoon was part of a larger series, and the animation style looked old/low budget for the early 2000s, reminiscent of the old Scooby-Doo cartoons from the 70s.

A simpler approach, but how about Jack O'Lantern? An episode of the animated Rankin/Bass anthology show Festival of Family Classics from 1972, it contains:

The episode is currently available on Youtube here, and here's a trailer:

Possibly Journey Back to Oz (1972). It has the jack-o-lantern character with the removable head and the witch, although not the headless horseman. Still, there's enough there that I'm proposing it as an answer. 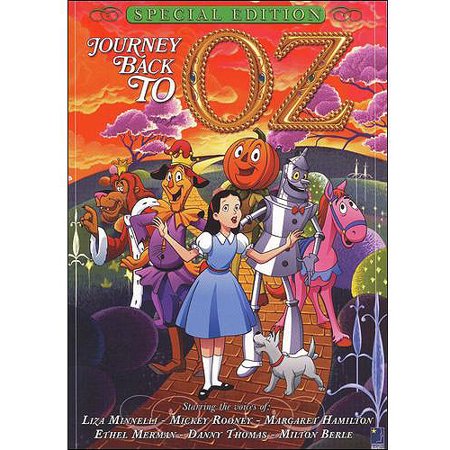 Could this be The Legend of Sleepy Hollow, the second segment of the 1949 animated film The Adventures of Ichabod and Mr. Toad?

I offer only one exhibit in support of this suggestion: 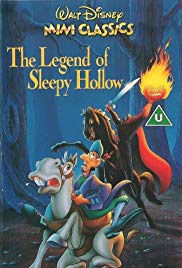 The most famous fictional character with a pumpkin or Jack o'lantern for a head was Jack Pumpkinhead in the Oz books.

Jack Pumpkinhead was created in the second book The Marvelous Land of Oz in 1904 and appeared in many of the later books.

So Jack Pumpkinhead may be a character in many live action and animated movies set in Oz and more or less loosely based on various Oz books.

Journey Back to Oz (1972) is an animated movie loosely based on The Marvelous Land of Oz, but featuring an army of green elephants working for the witch Mombi among other changes, and Jack Pumpkinhead is a character. There is a sequence where trees are turned to gold.

The OP suggests it was an episode of an animated series.

Robert Ridgely voices Jack Pumpkinhead in the 1980 Thanksgiving special Dorothy in the Land of Oz.

Of course, there can be other animated characters with pumpkins for heads. I hope this can help you find the series you asked for.

3
Unknown VHS sci-fi western-style cartoon movie from the 80s/90s
9
2000's cartoon where a six-fingered pianist gets his extra finger(s?) removed for the girl he likes
15
80s-90s (?) cartoon about a werewolf - something like Scooby Doo knock off
12
Story identification: kids in hot-air balloon, chased by wizard
7
Space adventure cartoon with underground caverns and collapse