Which reality is the Guardians of the Galaxy (2008) series set in?

The original Guardians of the Galaxy was set in the Earth-691 universe, according to Wikipedia. Since one of the originals comes through a fissure in space-time in the 2008 series, I assume it's not in the same universe.

Which universe is it in - the standard Marvel universe, or some alternate again?

The Guardians of the Galaxy-2008 takes place in the canon Earth-616 Marvel timeline. They are only connected to the original group tangentially by a meeting with Vance Astro from another unknown temporal continuity. The group that will be seen in the Marvel Cinematic Universe (Earth-19999) will likely have slightly different origins and capabilities.

The Guardian of the Galaxy have a complicated pedigree. The first set came from an alternate universe Earth-691. They were all the last survivors of a war in our solar system against an alien reptilian species called the Badoon. 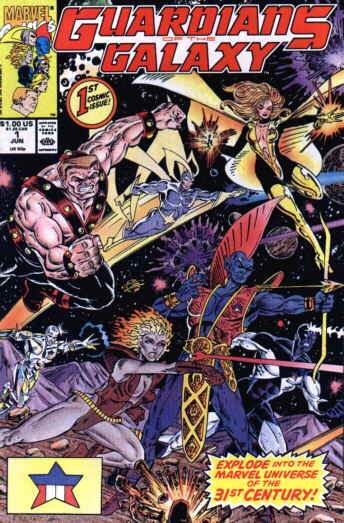 The Guardians are active in the 31st century in an alternate time-line of the Marvel Universe (Earth-691). The original members of the team include Major Vance Astro, an astronaut from the 20th century Earth who spends a thousand years travelling to Alpha Centauri in suspended animation. He is also the future-counterpart of the hero Vance Astrovik, now called Justice. Martinex T'Naga, a crystalline being from Pluto; Captain Charlie-27, a soldier from Jupiter; and Yondu Udonta, a blue-skinned "noble savage" from Beta Centauri IV comprise the original team.

During the course of the war against the Badoon, the team recruit two more members - Starhawk and Nikki - and travel back in time and encounter several of the heroes of 20th century Earth, including Captain America and the Thing (Marvel Two-In-One #4-5, 1974).

I liked this set of Guardians but they weren't able to live up to their title as protectors of the galaxy at first. Since they came from an alternative future, they were not considered part of the canon Marvel Earth-616.

And here is where it gets complicated. 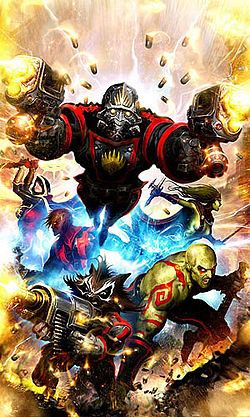 In the aftermath of the Phalanx invasion of the Kree, Star-Lord decides to form a team of interstellar heroes that will be proactive in protecting the galaxy, rather than reacting to crises as they happen. To this end, he recruits Adam Warlock, Drax the Destroyer, Gamora, Phyla-Vell (the new Quasar), Rocket Raccoon, and Groot, with Mantis as support staff. On the recommendation of their ally, Nova, the group establishes a base of operations on the space station Knowhere, which possesses a teleportation system with near-universal range.[19] An intelligent, telepathic dog named Cosmo is Knowhere's chief of security and works closely with the new team.

Making things more complicated is the fact that every one of the new Guardians already has a long pedigree and sometimes had a very different appearance since the last time they had been seen. As a matter of fact, most of these heroes were part of short-lived, and considered relatively-unsuccessful-financially series from the 1960's and early 1970's. 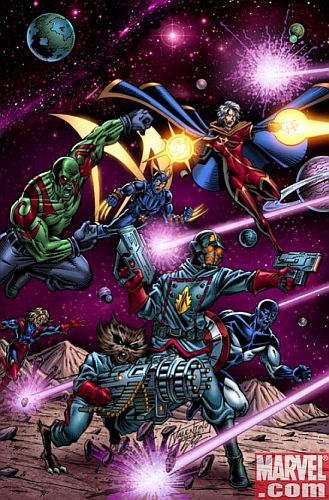