Fantasy 1975 prior, professor uses an equation to travel to Midgard and helps Thor defeat the giants who try and trick him

Read this in middle school, the hero uses a mathmatical equation to travel to other realms by speaking the equation, I remember the author used the Thor vs Midgard Serpent story, Loki actually helps the hero see the items as in disguise and helps Thor defeat the giants, hero then goes to other realms the fairies etc. finally returns home. Been searching 20 years

Very possibly: The Incomplete Enchanter by L. Sprague de Camp and Fletcher Pratt. Published in paperback in the 60's. The first part is The Roaring Trumpet, where Harold Shea uses symbolic logic devised by his boss, psychologist Reed Chambers, to project himself into the world of Irish mythology, but instead lands in the world of Norse myth. Actually, Shea sees through the illusions of the Norse Giants and helps Loki and Thor get the weapons. 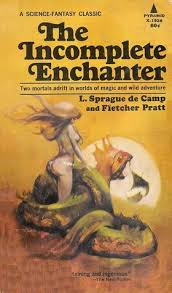