2000s TV show: people stuck in primitive other world, bit of magic and bit of dinosaurs

There were a couple of people stuck in a primitive other world. There was a husband and wife, mid 30s, an old smart dude and a young 20s guy who hooks up with one of the blonde natives who proceeds to stay with the group (at some point he disappears). They make their home base in a big tree house in a forest. There was a bit of magic and I think there was also a bit of dinosaurs.

Not a direct match, but enough similarities that I think it's worth mentioning.

"At the dawn of the 20th century" a band of adventurers, led by adventurer and scholar Professor Challenger, embark on an expedition to prove the existence of a lost world isolated from the rest of the modern world. The British expedition team, consisting of a mismatched group of enthusiasts, all with less than selfless reasons for making the journey, begin their trip under less than ideal conditions. The intrepid band consists of Professor George Edward Challenger, Professor Arthur Summerlee, Marguerite Krux, Major Lord John Richard Roxton, Edward T. Malone. During their journey disaster strikes and their hot air balloon crashes in the uncharted Amazon jungle, where they end up on the prehistoric plateau. There they find themselves trapped and isolated in this dangerous land. The group is assisted by a young jungle-savvy woman named Veronica Layton, whose parents disappeared eleven years before. Her family was part of a research group that became isolated and was then lost under mysterious circumstances. Together with a young woman from the future named Finn (Lara Cox), the group fights to survive against carnivorous dinosaurs, vicious Neanderthals, a race of lizardmen, and other perils as they search for a way to escape. The stories usually worked out that two separate adventures were going on at the same time. In the later series, it is clear that they actually landed on the plateau in 1919.

It had the older scientist and the blonde native (well aleady there) girl. I don't remember there being a husband and wife, but there were a middle aged man and woman in the group. They also resided in a large tree-house and there were elemnets of magic in some of the storylines. 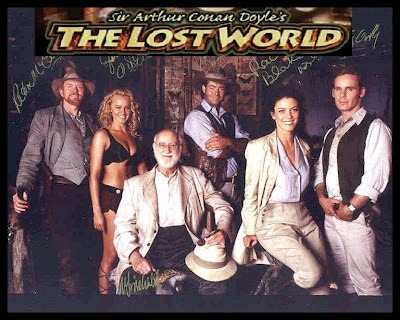 It originally aired between 1999 and 2002, so a little off in timeframe, but that could be explained if watching repeats or watching somewhere other than USA.

8
Have you seen this Sci Fi movie\show before? (Reptilians)

5
90s Sci-Fi show - Prisoner made from parts of other people
6
Looking for early 2000's show about teenage boy and girl stuck on an icy planet
25
Nuclear missiles about to land but time stops except for a lone housewife. What show is it?
4
Animated film or TV episode from the 80's or earlier?
5
TV show about a group of boys and magic
10
2000s Animated TV show where teenagers could physically go into a virtual world
6
Looking for 90s/2000s kids sci-fi show where creatures turn up in our world. Live action with bad CGI