Are these two secret projects the same?

In Captain Marvel, we see that before she lost her memories, Carol Danvers was,

a test pilot for a [secret] government project named Pegasus.

In The Avengers (2012), Loki invades a secret facility and steals the Tesseract from Fury and group. While he leaves the building, I caught a glimpse (screenshot below) with the title: 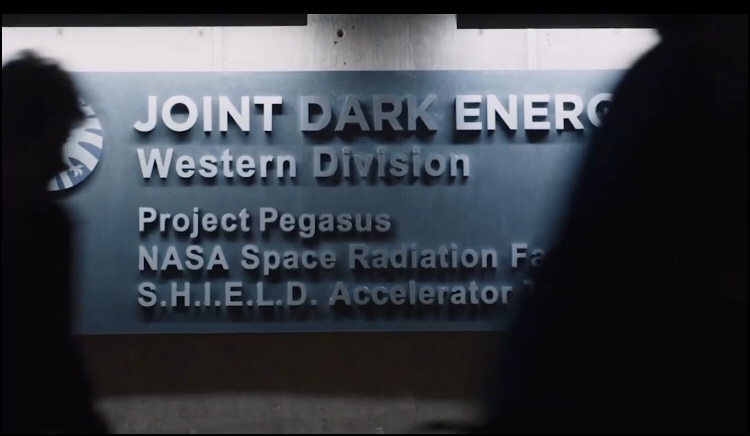 And since in Captain Marvel,

Project Pegasus was shut down and completely hidden due to the death of the scientist (Mar-Vell) and the pilot (apparently),

Are the two the same project?

According to Marvel Studios president Kevin Feige, the Project Pegasus in Captain Marvel represents an earlier stage of the same general endeavor as that shown in the first Avengers film (and mentioned in Iron Man 2):

"P.E.G.A.S.U.S. was name dropped ... in Iron Man 2, then it's also at the top of Avengers 1," said Feige. "And it was early on tying her into that early MCU. What do we know about the period of the MCU in the years before Iron Man? Well, the Tesseract and P.E.G.A.S.U.S. were part of it. And then also you're seeing another side of that same facility was interesting."

This is an interpretation based on actual facts from the movies, you can recheck them and burn me in the stake if I'm wrong, but please do it so based on similar data.

Project PEGASUS might have the same name and be in the same facility, but in Captain Marvel is NOT a SHIELD Project.

1. In Captain Marvel Movie we see that:

SHIELD is aware of Project PEGASUS. In the movie Nick Fury says Pegasus location is classified. However, his low security clearance is enough for him to know where it is.

At the gate he identifies as a SHIELD Agent, he is not saying "this is Agent Fury" he is saying: "Nicholas Joseph Fury, Agent of SHIELD", this may be an overstretch but one can imply from this that he is from an agency that is external to PEGASUS.

It's not easy to get a picture, but around minute 43 they arrive at the actual base and we see in the screen this title:

When they're in, there's not a single SHIELD scientist or agent in sight and they're received by military personnel. Then they are being kept waiting and decide to look for themselves, that's when Fury sends a beeper message to SHIELD asking to come and help them. If this were a SHIELD base they would be surrounded by agents in less than 5 minutes, since... it's a SHIELD base. But they're not.

One can also think that being a SHIELD Project there's no need to go look for intel since they already have it... unless this is a top secret undercover HYDRA base that nobody knows about (like the one in Captain America: The Winter Soldier) or from another entity (like the Guesthouse in Agents of SHIELD). But this is a simple government research facility accesed also by NASA which is already known to a Level 3 Security Agent like Fury.

Another detail is that in Avengers, Project Pegasus is oficially looking for new energy sources (though they're really making weapons, as Captain America discovers later in the movie), while in Captain Marvel Project Pegasus is developing new aircraft (which makes more plausible the participation of the US Air Force).

My take, based on The Avengers Prelude: Fury's Big Week is that this project was ditched by the Air Force, taken by the World Security Council and reassigned to SHIELD, with an entirely new objective (they even threw away the logos).

Other Sources that may support my observations:

Project P.E.G.A.S.U.S. (or Pegasus) was the name of the joint NASA-United States Air Force project run by Wendy Lawson. The goal of the project was studying the Tesseract in order to build the Light-Speed Engine. The Project was shut down upon Lawson's death in 1989 and restarted by the World Security Council and S.H.I.E.L.D., to continue experiments on the Tesseract, until the actions perpetrated by Loki rendered the project defunct.

In the (canon) prose novel The Cosmic Quest Volume Two: Aftermath, Dr. Selvig describes project P.E.G.A.S.U.S. as being one of S.H.I.E.L.D.’s covert projects.

Years later, Selvig hired Tan to work with him at S.H.I.E.L.D.’s Project P.E.G.A.S.U.S., where they studied the Tesseract day in and day out, and she grew to become one of his closest friends and colleagues.

Not the answer you're looking for? Browse other questions tagged marvel marvel-cinematic-universe the-avengers-2012 captain-marvel-2019 or ask your own question.

15
How did the power source of Mar-Vell's aircraft end up with her?

24
What are these events from Widow's past?
25
How could agent Clint Barton (Hawkeye) function while on the SHIELD Helicarrier deck at 30,000 feet?
6
Which characters are dead in the MCU as of Guardians of the Galaxy 2?
6
Captain Marvel's (Carol Danver) Origin Story comic series?
8
Are the Kree the good guys?
8
Why does Yon-Rogg lie to Ronan about Skrulls being on Earth?
4
Can Captain Marvel break the fourth wall?