Within Hogwarts, where could you spend money?

This was inspired by a recent question about the Galleons that Hermione handed out for Dumbledore's Army meetings.

As far as I can recall, during Harry's time at Hogwarts, there were no places within Hogwarts castle or the school grounds where the students would have to regularly spend money (at least during term time). I know that people can easily forget they have money in their pockets, but students at Hogwarts appeared to have no reason to always keep money on-hand. The only exceptions I can recall to this were mail-order items - like when Harry and co. order presents for each other - or paying the owls for newspaper and magazine subscriptions.

My question is, aside from what I've mentioned above, were there any approved shops, services etc. within Hogwarts that the students had to pay money for? Let's assume the early days of Weasleys' Wizard Wheezes doesn't count as they probably weren't operating within the school rules!

A poster seen in the Harry Potter films advertises a Hogwarts tuck shop, apparently ran by Mrs Tubbs. The tuck shop apparently sold freshly baked Cauldron Cakes and Pumpkin Pasties, and was advertized on the Gryffindor noticeboard. Bear in mind that this is only ever mentioned in the movies, so it doesn't hold any weight in the main (book) canon. 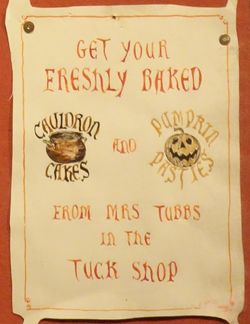 A large sign had been affixed to the Gryffindor noticeboard, so large that it covered everything else on it – the lists of second-hand spellbooks for sale, the regular reminders of school rules from Argus Filch, the Quidditch team training timetable, the offers to barter certain Chocolate Frog Cards for others, the Weasleys' latest advertisement for testers, the dates of the Hogsmeade weekends and the lost and found notices.
Harry Potter and the Order of the Phoenix - chapter 17 - Educational Decree Number Twenty-Four - page 325 (emphasis mine)

As seen in the above quote, spellbooks are shown to be sold second-hand, and there are apparently enough for offer at a time to warrant multiple lists. Nobody reacts as though these are a new addition, so it's likely they were always there or a recurring feature. There are likely rules concerning what you can post on the board, considering Prefects are allowed to take down notices posted by students, and it would make sense if approval is required to post things on the board altogether - it seems likely that teachers would at least know about them, at the very least.

'They are the limit,' said Hermione grimly, taking down the sign, which Fred and George had pinned up over a poster giving the date of the first Hogsmeade weekend, which was to be in October. 'We'll have to talk to them, Ron.'
Harry Potter and the Order of the Phoenix - chapter 12 - Professor Umbridge - page 206

'And speaking of your Skiving Snackboxes,' said Hermione, eyeing Fred and George beadily, 'you can't advertise for testers on the Gryffindor noticeboard.'
Harry Potter and the Order of the Phoenix - chapter 12 - Professor Umbridge - page 210

These spellbooks available for sale are never mentioned anywhere else, though, so there's unfortunately no more information than them. It also seems quite strange that nobody suggests Harry get a second-hand Potions book (rather than a new one from Flourish and Blotts) in Half-Blood Prince (unless the definition of spellbook is more literal than I thought).

31
How did Harry, Ron and Hermione buy presents for each other?
6
Were the Galleons Hermione passed out technically illegal?

42
Where did Hogwarts get money for salaries, food and other purchases?
14
Is it ever explained why Harry has to cage Hedwig when he travels?
32
Did Harry Potter ever invent any spells?
12
How did Malfoy feasibly manage to buy Peruvian Instant Darkness Powder from the Weasleys?
25
Why are Hogwarts students threatened with expulsion so much?
9
Are Love Potions actually banned at Hogwarts?
29
Are Hogwarts students allowed to do magic over the Christmas/Easter holidays?
11
Is there wizarding education for adults?
9
What was the original version of this post on JK Rowling's website?