When were female captains banned from Starfleet?

In the TOS episode Turnabout Intruder, a woman who wants to be a Starfleet captain states that

Kirk agrees with her that it seems unfair.

Clearly about a decade earlier there were female starship captains such as Philippa Georgiou. What was this rule and when was it in effect?

There are two interpretations of that scene. The first, and the one generally accepted these days, is that she was off her rocker, and made a statement that stated there was discrimination against her because of what group she belonged to (ie, women), thus explaining her own failings.

Unfortunately, that wasn't the original meaning. The original intent of that scene was that she was speaking the absolute truth: Starfleet didn't allow women in command.

This was confirmed by Nimoy and Shatner in a conversation with the authors of Shatner's 1979 biography Where No Man...

"What is easier for me to deal with on that particular script is the knowledge that the writer was making a script in which his goal was to prove, quote, 'That women, although they claim equality, cannot really do things as well as, under certain circumstances, as a man -- like the command function, for example. And it was a rather chauvinistic, clumsy handling of an interesting question. What he set out to prove was that this lady, given command of the ship, would blow it. That’s really what the script was about. Just that simple. You see."

"Yeah," Bill agrees. “The problems were solved without really --"

Leonard cuts in, nodding. "That’s, what I was dealing with when we were shooting that show -- the knowledge that that was the concept. And I rebelled against the concept. I was uncomfortable doing the whole show because I didn’t believe in the concept."

Roddenberry later admitted the line was sexist and said he regretted it. However, it was very much in keeping for him. Roddenberry's original story was even worse.

At the time he was going through a nasty divorce, and had a low opinion of women in general--and there are many reports of the time of the crap he said, including statements like "...all women are c***s who can't be trusted" (said several times at story meetings). It's reliably reported that, even putting the divorce aside, he was absurdly sexist even for the time.

You can see the same sort of thing earlier, in the original pilot "The Cage" (later re-used in "The Menagerie") when Christopher Pike makes a statement about being uncomfortable with the idea of a woman on the bridge, which then causes the bit between him and Number One about not considering her as a woman.

Incidentally, the reason Majel Barrett was dropped from the role, contrary to Roddenberry's later statements, had nothing to do with the studio/network being uncomfortable with a woman being second in command, as he claimed. What they had a problem with wasn't an actress playing the part, they had a problem with an actress then having an affair with Roddenberry playing the part, as they were nervous about the potential backstage drama that could result. But anyway...

So, long answer short, yes, the line and backstory was intended to be absolutely as sexist as it appears: Lester is justifiably bitter that as competent as she otherwise was, she could never command a starship because Starfleet didn't want women putting cooties all over their captain's seats.

However, even at the time it was recognized just how offensive that idea was, and it grew even more unacceptable, so by the time the 1980s rolled around and Star Trek IV showed the captain of USS Saratoga was a woman, it was firmly understood the idea was stupid, and everyone proceeded to ignore it. So, gradually, the contorted explanation that no, Janice Lester was just crazy and Good Ol' Gene wasn't a misogynistic ass became the accepted one. Christopher Pike, when he showed up on Discovery, didn't have any sort of issue with women in senior positions (even reporting directly to one), Starfleet had female captains right from the early days, and there was never a ban on women in the Big Chair.

Here is a clip from the trial scene in ST4. The (unnamed) Starfleet officer has an admiral's insignia, and there may have been others in that scene (I didn't check it all). One wonders if someone working on the movie wasn't making a point. 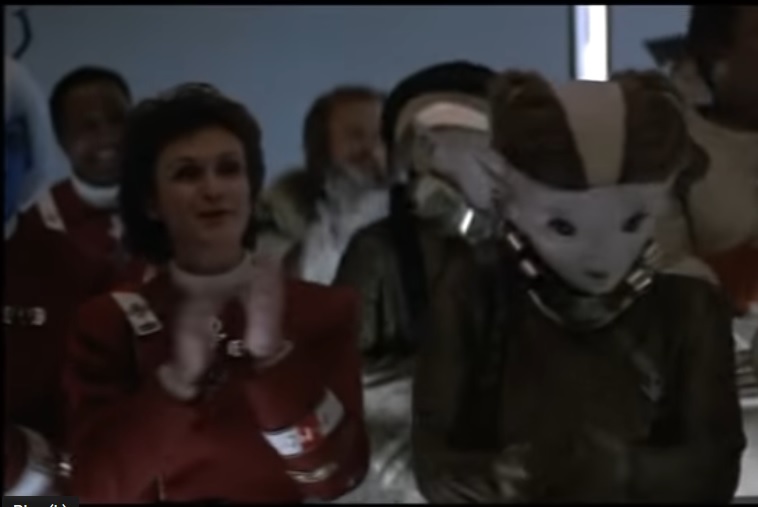 I'm not sure we can infer an absolute limit on gender roles based on a single line. Certainly it was not Roddenberry's meaning -

“Nowhere in my story was the statement made that this woman wasn’t qualified to command because of her gender. She lacked the qualifications on a personal level, and she also happened to be emotionally unstable. In her mind, sure, she was being discriminated against. And that could have been another theme in the story — how we can limit ourselves because of our own belief that we will be discriminated against. It can become a self-profiling prophecy.”

These Are The Voyages -TOS Season Three by Marc Cushman

Although Kirk agrees with her we could see his comment as placatory rather than actual "agreement" with her position.

KIRK: I never stopped you from going on with your space work.

KIRK: No, it isn't. And you punished and tortured me because of it.

The James Blish novelisation of the episode presents a slightly different version of events and opens up a different interpretation.

She opened her eyes and stared directly into his. “The year we were together at Starfleet is the only time in my life I was alive.”

“I didn’t stop you from going on with space work.”

“I had to! Where would it lead? Your world of Starship captains doesn’t admit women.”

“You’ve always blamed me for that,” Kirk said.

“I couldn’t have changed it,” he pointed out.

“You believed they were right. I know you did.”

“And you hated me for it. How you hated. Every minute we were together became an agony.”

“No, it isn’t. And I was the one you punished and tortured because of it.”

“I loved you,” she said. “We could have roamed among the stars.”

“We would have killed each other.”

She's not bemoaning the fact that Starfleet prevents a woman from becoming a captain, but rather that Kirk's ambition to become a captain prevented them from having a fulfilling relationship because the Kirk buys into the mythos that a captain's full attention has to be given to his ship and that it can't be shared with a woman.

Although it's immensely unlikely that attitudes on gender would have been altered by the Borg's interference, it is the case that the gender attitudes of the writers have changed significantly in the past 50 years. The no female captains policy seems like an example of Star Trek: TOS's general silliness that has been subsequently retconned. Another example of retconned silliness would be the ability of the Enterprise to fly to the center of the galaxy or clear across the galaxy on a short timeline with no supernatural assistance. They also totally changed the warp factor benchmarks so that you can't exceed warp 10. The ridiculous, skimpy uniforms for female crew members were eliminated. The physical appearance of Klingons was radically altered; and then Star Trek: DS9 and Star Trek: Enterprise contorted themselves to manufacture an explanation for the change. Lots of the socially progressive, technologically progressive writing of the 60's is already old fashioned by today's standards; including the crude UI design and computing ability of the computers and hardware.

In other words, it's not necessary that all events of Star Trek: TOS be canonical and logical; and this is an example of that.

Not the answer you're looking for? Browse other questions tagged star-trek starfleet-command or ask your own question.

19
Were there military personnel / branches of service in Federation aside from StarFleet?
31
When/How would Star Trek captains update their log?
4
Why didn't they apply force on the primitive civilization which used to make Starfleet officers gladiators?
25
Are there any non-human captains (and up) in Starfleet?
11
When did 'Star Fleet' become 'Starfleet'?
17
Why are all Starfleet ships commanded by Captains?
4
How old was Peter Preston when he entered Starfleet Academy?
6
Why don't Starfleet captains force other Starfleet ships to lower their shields every time they fight?
6
When did Starfleet use stasis pods?
0
Are there any mercenaries that were former Starfleet personnel?