Looking for the name of a SF or fantasy novel.

I probably read this in the 70's or 80's. Believe was first published post 1960. Could be part of a larger series. My faulty memory keeps trying to tell me the author was a woman - but really not sure...

Basic plot that I can remember: Two main characters (probably human, or close) involved in some type of quest (which takes place on a planetary surface, most likely utilizing some type of non-advanced, animal-type transportation - horses perhaps). One character is a woman who has nobility in her background. The other character is her faithful assistant, a male.

The novel was quite good, rather long (as I recall), and had quite an impact on me during my younger years.

From the description, the story that leaps to mind is Gate of Ivrel and the following books of the Morgaine saga by C.J. Cherryh.

Morgaine is a powerful (not technically aristocratic, but competent, sophisticated and old beyond her apparent years, so able to fake it) woman on a quest to destroy the gate of the title and all others like it.

Nhi Vanye i Chya is a young sub-noble (merely a dai-uyo as I believe he puts it) warrior who is outcast from his family and joins Morgaine on her quest.

Initially Morgaine merely tolerates Nhi Vanye as a local guide, intending to abandon him when she closes the gate. But they are pursued through the gate, cutting him off from his homeland with no way to return, so she keeps him. Eventually (in later books) she trusts and values him enough to entrust her quest to him in the event she should fall. 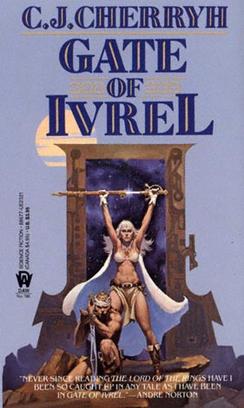 6
Fantasy Novel - Female Protagonist who climbs a tower and encounters magical obstacles before facing off with a wizard
10
Help Identifying fantasy novel about magic red jewel
8
What is the tilte of Fantasy Genre Novel with 2 brothers (the sons of satan), female author?
6
Fantasy novel with wizarding academies and a quest for a powerful spell
14
Novel about reincarnated lovers across history
5
Novel, group transported to a fantasy world, wild/chaos magic
16
A juvenile fantasy novel with the hero being tutored by two famous Jacks from fairy tales
9
Fantasy novel where characters have gemstones implanted in their bodies. Female baddie is trying to 'harvest' them
21
80s sci fi film with quest to replace lost female droid companion