Mutated beetles cartoons (characters made of rope and rings)

I need help identifying old cartoon from my youth. It has been unbearable itch for me for quite some time.

I tried finding it with google and wikipeda but couldn't find it.

Your desciption sounds a lot like Creepy Crawlers, a 1994 cartoon that was inspired by a toy of the same name.
From wikipedia:

The show is about Chris Carter, a self-described "normal kid" who is interested in magic. While working at the Magic Shop of bitter discredited stage illusionist Professor Googengrime, Chris designed and built a device he called "The Magic Maker", ostensibly for use in some unspecified magic trick. A particular once-every-thousand-years planetary alignment, the Magical Millennium Moment, rained down cosmic energies on the shop one fateful night, which somehow made the Magic Maker capable of creating strange, man-sized bug/magic trick composite mutant creatures. The three creatures formed that night, Hocus Locust, Volt Jolt and T-3 (dubbed "Goop-Mandos" by Googengrime), despite looking bizarre, turned out to be friendly, and joined forces with Chris, but Googengrime kept the Magic Maker when Chris and the Goop-Mandos escaped from the shop. Each episode thereafter concerned Googengrime's latest attempt to gain power and conquer the world with a Magic Maker-created "Crime Grime" monster, and Chris and The Goop-Mandos' efforts to stop him, and retrieve the Magic Maker from his evil clutches.

As the series went on, more Goop-Mandos were created. In addition, a young girl named "Sammy" Reynolds became a close ally of the group.

So, we have a group of bug-like warriors 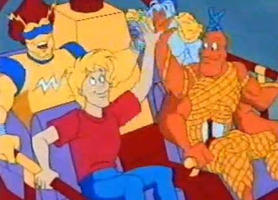 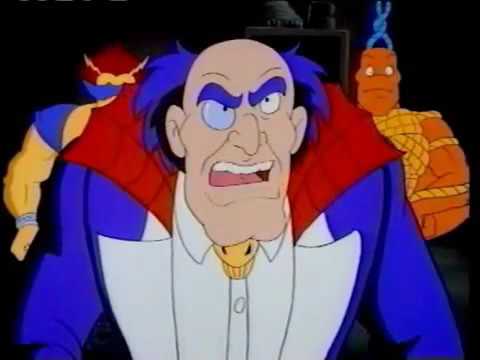 13
Cartoon movie where the main character had a robotic arm
8
Identify a Spider-Man TV episode in which the villain was a speedster
6
Book series: Rings, chainmail, and words of power. Female protaganist
7
Cartoon where characters would fight with capsule gauntlets that shoot out small creatures
6
Looking for a children show with talking dogs
6
I'm looking for a specific cartoon TV show from 00s about kids possibly living in a...quite big house?