Was Spock the First Vulcan in Starfleet?

The idea that Spock was the first Vulcan in Starfleet seems to be a bit of common cultural knowledge with little or no foundation.

Because the young Vulcan chose to join Starfleet, he and Sarek opened an 18-year rift over Sarek's hope his son would attend the Vulcan Science Academy. Spock was the first Vulcan to enlist in the Federation Starfleet, serving aboard the U.S.S. Enterprise under Captain Christopher Pike as a lieutenant, and later for James T. Kirk.

But the presence of Admiral Patar in Discovery S02:E09 strongly suggests otherwise. However it is possible that more senior Vulcans transitioned from another service (such as the Vulcan Science Academy) after Spock joined.

T'Pol is another common problem with this, however my understanding at the moment is that Enterprise NX-01 is an Earth Starfleet, not a Federation Starfleet vessel and as such T'Pol, no matter what her status on Enterprise, would never have been a member of "Starfleet", as the organisation in question does not exist until after the end of the series Enterprise.

Is there any canonical data to confirm or categorically disprove the status of Spock as the first Vulcan in (Federation) Starfleet?

He is not the first Vulcan in Starfleet.

Star Trek Enterprise by itself puts a nail in the coffin: near the end of the third season, when the ship returns to Earth after having stopped the Xindi attack, T'Pol is formally inducted into Starfleet and given the rank of Commander.

In TOS, there was also a clear indication: in "The Immunity Syndrome", USS Intrepid is crewed entirely by Vulcans, so unless they transferred en masse from the Vulcan Expeditionary Group (which seems unlikely, given the apparently conservative nature of the organization as shown in Star Trek Discovery), that would imply the senior officers were, at least, Spock's peers. As good as Spock was, it's unlikely another Vulcan would make captain before him if he had a head start.

Star Trek Discovery simply adds to it in that they've shown Vulcan admirals in Starfleet, while Spock is still a lieutenant in his 20s.

Given the question change about "Earth Starfleet" or "Federation Starfleet", there is no difference. This is clearly demonstrated in Season 1 of Star Trek Discovery when Saru asks the computer to list the most decorated captains in Starfleet history, with no qualifications as to what organization he's talking about. Archer was listed, clearly indicating that as far as Starfleet was concerned there was no distinction.

I hazard that he was not. In the Original Series episode "Immunity Syndrome", we have the USS Intrepid. We are told the Starfleet vessel was crewed exclusively by Vulcans. To have 430-ish Vulcans, from the Captain down to the Assistant Dishwasher, would suggest several of his people were ahead of Spock in processing through the Academy to serve.

I don't think so.

Memory Alpha states that T'Pol joined Starfleet some time around 2154 as a commander on Captain Archer's Enterprise (the NX-01), though the wording is a bit ambiguous.

Following a Xindi attack on Earth on April 24, 2153, Enterprise was recalled home and underwent a major refit in preparation for a mission into the Delphic Expanse. Because this mission was seen by the Vulcan High Command as being an Earth matter, Ambassador Soval ordered T'Pol to return to Vulcan, to be reassigned to the Ministry of Information. It was expected that, after a brief time at the Ministry, she would be allowed to return to Earth to continue her diplomatic duties. However, T'Pol resisted. As Enterprise set course for Vulcan to deliver T'Pol home and proceed to the Expanse, she abruptly resigned her commission and chose to remain aboard. (ENT: "The Expanse") During her tenure as technically a civilian amongst the crew, T'Pol wore a variety of bodysuits in a variety of different color schemes. These included blue/grey, white, and muted pastel. T'Pol later continued to wear a collection of bodysuits adorned with rank insignia, assignment patch and so on when she joined Starfleet.

Though Archer's starfleet is not the United Federation's Starfleet, Archer was present when the Federation was founded, and assuming Earth's Starfleet was entirely absorbed into the UFP's Starfleet, T'Pol was also a member of it.

Although this just may prove to be another potential contradiction, since it is Star Trek Discovery that introduces him, there is Admiral Terral. 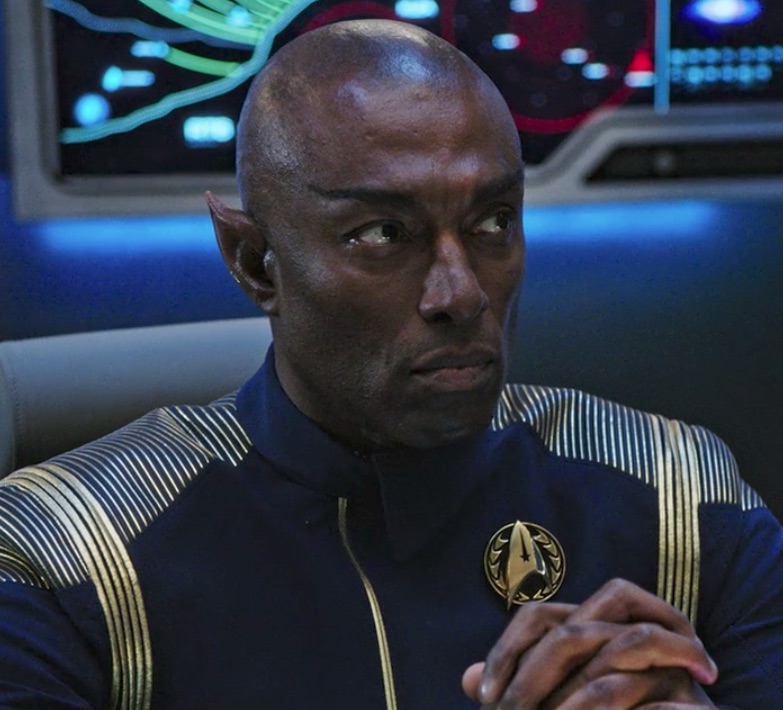 Terral was a Vulcan who served as an admiral in Starfleet during the Federation-Klingon War of 2256-57.

In December of 2256, he attended a strategy briefing with Captain Gabriel Lorca, Admiral Katrina Cornwell, and two other admirals. (DIS: "Choose Your Pain")

It seems likely given that he is an admiral that he would have had to have gone through Star Fleet Academy and beyond to require such a rank. However, there is no background information on this character at this time to prove it as certain.

This question is closely associated with the question

Was Spock the first Vulcan to attend Starfleet Academy?

I stumbled across Star Trek: The Fearful Summons, © 1995.  It is a novel written by Denny Martin Flinn, one of the authors of the screenplay for Star Trek VI: The Undiscovered Country (1991), and claims (on the cover) to be a sequel to that film.

On page 1591 we find this conversation2:

Spock and Sencus both raised their hands in the traditional Vulcan greeting, and said quietly, “Live long and prosper.”

“You were the first Vulcan to graduate from Starfleet Academy,” Sencus said.  “In those days, among my friends at the Vulcan Science Academy, that was tantamount to running away and joining the circus.  We all knew the legend.”

and it goes on to change the subject.

2 Commander Sencus, Science Officer of the U.S.S. Excelsior, is a full-blooded Vulcan.

I’ve had this notion in my head since I was a kid, since before even TNG existed. I can’t for the life of me tell you where it came from, but clearly it predates all productions after about Star Trek III.

I remember reading a notion in something out of fandom that explains why the Intrepid doesn’t refute this. The idea was that There was pressure on Vulcan by the Federation to send more people than just Spock to join Starfleet, which the Vulcans, not wanting to be militaristic, resisted. The compromise was Them agreeing to crew an entire ship, which was the Intrepid.

My guess is that these notions came from interactions between fans and original series writers at conventions or other fan events. That’s just a guess.

Whatever their source, the scripts of later productions ensured these ideas would never make it into canon.

Perhaps from a 1966 perspective the question should be "Was Spock the first Vulcan to join the The United Earth Space Probe Agency?"

It seems a lot more reasonable phrased that way - also ignoring all of the subsequent retconning and pseudo-prequels Star Trek has experienced. Also when phrased that way it seems reasonable he was able to join because of his half human status and there is far more Star Trek promotional material establishing Spock was the first half Human-Vulcan.

Keep in mind in TOS the only time we saw another alien crew member on the Enterprise was in the Mirror Universe. The Federation was not mentioned until episode 23! Entire aspects of Vulcan society were secret to outsiders.

Not until TAS or ST:TMP was the Enterprise depicted as integrated with other Federation species.

The all Vulcan USS Intrepid was equally not integrated - and a 100% Vulcan ship was depicted in DS9. So for sure there are unknown rules we viewers do not have access to for how crews are allocated. (I'd presume having a starship to crew is a perk of being a Federation member - in addition to the logistical benefits of having a ship meet the environmental preferences of a single species)

Further DS9 "Rapture" mentions the Bajoran Militia would be absorbed into Starfleet when Bajor joined.

So my answer, again from a very 1966 perspective, would be the Vulcan crew of the Intrepid was from a Vulcan service despite the ship being built with the unified efforts of the Federation (based on it having an Earth ship name). It likewise seems reasonable to presume there is a common code of conduct - the prime directive would apply to a Vulcan ship as much as an Earth ship.

Spock would have been an anomaly as an alien in the Earth starfleet / United Earth Space Probe Agency.

As the Federation matured and became more integrated - so did the military - and by the TAS era the fleet was integrated for the most part - though some species would probably still form the majority of certain ships for treaty obligations and practical reasons - again as seen in DS9. United Earth Space Probe Agency and its equivalents were all merged into a truly Federation Starfleet and it was hardly noticeable - except for the odd paradox of Spock seeming like the first Vulcan in starfleet - which only makes sense when starfleet means United Earth Space Probe Agency.

Not the answer you're looking for? Browse other questions tagged star-trek vulcan spock starfleet-command or ask your own question.

30
Did Chief O'Brien go to Starfleet Academy?
5
Who was the first full-blooded alien to join Starfleet and be assigned to a spaceship?

29
How would Starfleet know what a Romulan looks like in Star Trek 2009?
5
Carol Marcus learning about David after The Search for Spock
7
Robert April in the alternate timeline
56
How did Kirk manage to get Captaincy of the Enterprise despite just graduating from Academy?
4
How old was Peter Preston when he entered Starfleet Academy?
34
Why does Starfleet allow racism and speciesism?
11
Why was T'Pol exempted from Starfleet uniform protocol?
10
What universities provide a path to a Starfleet commission?