I watched this TV series in my youth during the '80s, but the series could be from earlier.

I think that it was a dystopic present/future.

The only part that I remember is the end of the opening.

A line of soldiers (or guards) wearing a dark uniform and with their weapons (a type of rifles) in a two-Handed or “Ready” Carry position started going down a set of stairs towards the camera.

Behind the soldiers appeared a man with a grey or dark hooded tunic. He is wearing the hood and I think that you can see his face very well. He carries a dagger in each hand. Then he raised the daggers crossing them and forming the symbol of the series.

Be aware that I could be wrong in some details, but I am pretty sure to remember it if I watch the opening.

This is the 1987 TV series Knights of God 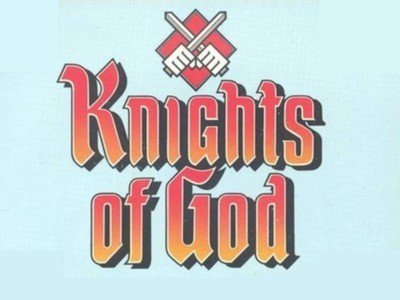 Knights of God was a British science fiction children's television serial, produced by TVS and first broadcast on ITV in 1987. It was written by Richard Cooper, a writer who had previously worked in both children's and adult television drama. Set in the year 2020, it showed a Britain ruled by the Knights of God, a fascist and anti-Christian religious order that came to power during a brutal civil war twenty years previously. It starred George Winter as Gervase Owen Edwards, the Welsh son of a resistance leader (Gareth Thomas), and John Woodvine as the Prior Mordrin, leader of the eponymous cult. Patrick Troughton played Arthur, the apparent leader of the English resistance, and Julian Fellowes played Mordrin's ambitious and ruthless second-in-command, Brother Hugo.

Here is the first episode, which opens with the sequence you remember, starting at about 0:21.

1
Help identify Animated Fantasy TV Series
5
Trying to find a book about a girl in a coma?
5
TV episode where man enters forbidden door, finds world with its own forbidden door
8
Cartoon series that tells stories based on fairy tales by Grimm Brothers, Hans Christian Andersen and others
7
Mutated beetles cartoons (characters made of rope and rings)