How did Arya survive the stabbing?

In Westeros, a simple paper cut can prove to be fatal. Robert Baratheon was killed by a boar.

Khal Drogo was killed by a mere scratch on his chest.

Talisa was killed when she was stabbed in the abdomen while she was pregnant.

But the way Arya was stabbed should have been immediately fatal to her but she survived somehow by diving into water. How is this possible? Is she some kind of mutant or metahuman?

Just a few misconceptions to clear up. Robert was gored by the boar, leaving a large round stab wound that can't be closed easily leading to infection. Drogo was treated by Mirri Maz Duur, who hated the Dothraki and easily could've poisoned him or caused an infection. Talisa was stabbed multiple times, and even if she lived more than a few minutes would never have escaped that room alive.

After Arya was stabbed she ran/swam away and was saved by Lady Crane very quickly. She had experience with medicine after she repeatedly fought with her lovers, put holes in them, and patched them up. According to her, she got very good at patching them up. With how quickly she was able to get to someone with competent medical skills, it's possible she was treated well, had the bleeding stopped, and had infection was prevented.

This is all ignoring the most powerful and dreaded thing that saved her though, plot armor.

Arya survives simply because she has the will to go on and more importantly was saved by Lady Crane who treated her wounds.

ARYA is lying in bed. LADY CRANE sits beside her, treating her wounds.

ARYA: You’re good at that. Where did you learn?

LADY CRANE stands and carries her tray of medical supplies into the abutting room.

LADY CRANE: So we’d fight and I’d put a hole in them. And then I’d feel terrible, so I’d patch them up. I got good at patching them up.

ARYA is afflicted with pain from her wound. LADY CRANE stands and pours a milky white liquid into a glass.

LADY CRANE: Milk of the poppy.

LADY CRANE: Sleep is the only way you’ll heal. Trust me, if my soup didn’t kill you, nothing will.

ARYA takes the glass, stares into it, and then drinks it down. She lays back and LADY CRANE tucks her in. ARYA falls asleep. LADY CRANE touches her hand and dims the candlelight.

The director for the episode, Mark Mylod, explains that it is her will for survival that also helps her survive the attacks.

"One of the many things our writers are so great at is allowing our characters to be flawed," he explained. "Nobody is perfect, we all make mistakes all the time, and Arya nearly pays dearly for it. Thankfully her determination to survive is such that she is able to come through it. But it is a really close call."

Business Insider, 'Game of Thrones' director explains the crucial Arya scene fans have been obsessing over

It's also worth noting that we don't really know the extent of the wound Arya receives, it could be... 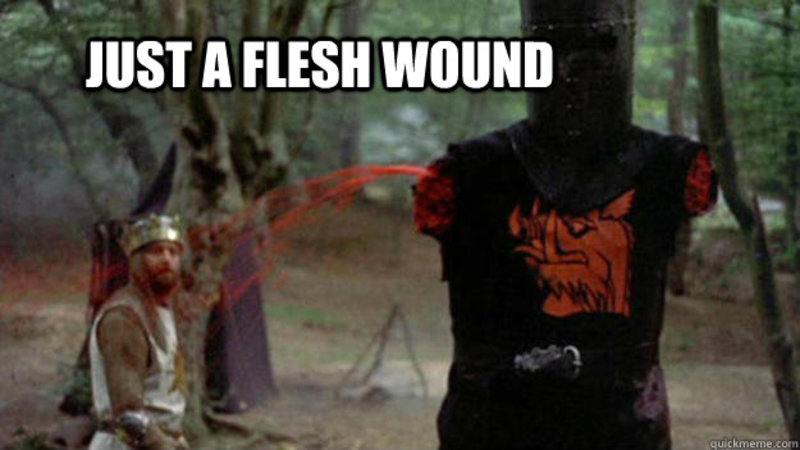 ...and as such wouldn't really have been "too bad" respective to some other wounds.

Now just to expand on the counter examples you make for why Arya should have survived.

29
Where did Arya get the face?
7
Is Arya the real Arya, or is Arya being impersonated by The Waif?
6
How did Arya Stark escape the Frey House?
26
How did Sansa and Theon survive the jump?
38
How many time has Arya actually used Needle?
13
How did Arya get her dagger back from Sansa?
10
How did Daenerys' army survive that much?
5
How did Arya not get burned in S8E05, "The Bells"?
3
How did Arya and the Hound get into King's Landing so easily?
8
How did Ghost survive this in season 8 episode 3?