Was Joseph Gordon-Levitt's character, John Blake based on any comic book characters?

What, if any, comic book characters is this character based on?

The cop part comes from Dick, who becomes a police officer in Blüdhaven after becoming Nightwing and was, of course, the original Robin. The hard-luck, orphaned origin and self-professed anger issues I think are mostly from Jason Todd. His deduction of Bruce Wayne/Batman's true identity comes from Tim Drake, who figures this out as a boy.

There’s been one appearance of a "John Blake" in the comics, but only as a kid who gets his report card stolen by the Joker in an early Batman strip, Jack Schiff's 'A Comedy of Tears' (Batman #13, 1942), later recreated for the 256 Pages Super Heroes Coloring Book. (source) 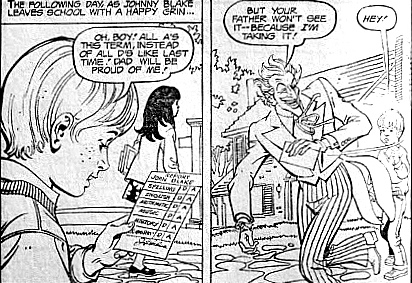