Sky City dystopian film, similar to Alita: young female robot befriends scavengers and discovers she used to be a warrior from the sky city

The film I need help finding is set in a dystopian future where humans coexist with cyborgs/robots. The protagonist is a young female who gets dumped down the trash chute and falls to ground level where the entire city is covered with parts and trash. When she lands an old man finds her and repairs her broken parts. When she wakes she finds herself among a group of scavengers who become her friends. One of the scavengers takes a liking to her and they fall in love.

Later she discovers that she is from the sky city and wants revenge for what they did to her. The scavengers take her out of the city to see the old war relics and she discovers she was a warrior in a previous life.

That’s all I can remember so far and recently I went to see Alita. The movie was basically a 1:1 of the film I’m describing. I even went as far as watching the original Alita and still it wasn’t it.

Is it possible that you're remembering seeing the original video adaptation from 1993?

I have yet to watch the 2019 production - but I enjoyed the 1993 anime quite a bit, and so have been looking forward to the new movie. From what I understand, while there was extra backstory added to some of the main of the main characters, and some of the characters were changed - the main beats of the story were kept intact. 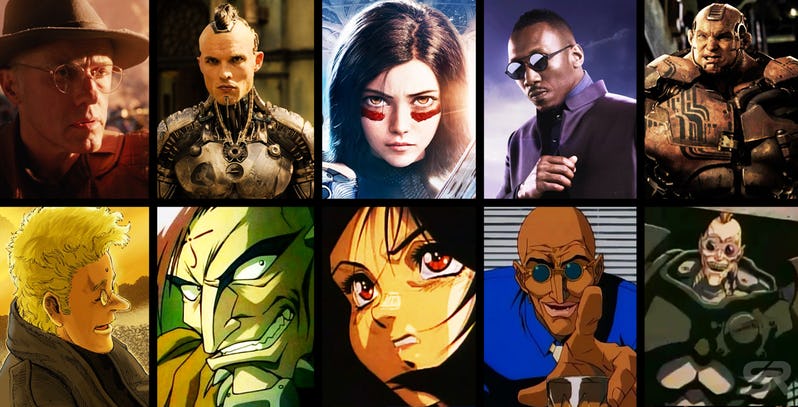 9
Dystopian film involving a child assassin and floating city
8
Which movie/TV show has an evil cyborg harvesting eyes from androids in a hidden town?
30
Girl goes over to the other site of her house and encounters her button-eyed "other parents"
9
YA dystopia: girl with high-ranking father leaves the city with an outsider boy
10
Horror film with a pregnant woman strapped to a bed and creatures that don't like light
3
Manga about a girl who lives her life as if she was in a manga