Why did we only see the N-1 starfighters in one film?

I think that this model has a really great design and looks cool and futuristic, but we only saw them in the Battle of Naboo. I have a lot of questions about that:

Why don't we see this particular starfighter in any other film?

It appears to be exclusive to the Naboo and so we wouldn't see it used by the Rebels or other forces outside of the planet. The Star Wars Databank has the following to say:

Protecting the skies and space around Naboo is the N-1 starfighter. Its sleek design exemplifies the philosophy of art and function witnessed throughout Naboo technology. Its twin radial J-type engines are capped in gleaming chrome and trail long delicate-looking finials behind the ship's single-pilot compartment. Behind the pilot sits a standard astromech droid, plugged into an abbreviated, ventrally-fed socket which requires the droid to compress slightly in order to fit within the vessel's curves. The fighter features twin blaster cannons, twin fire-linked torpedo launchers, and a capable automatic pilot feature.

The Databank also references its affiliations as "Galactic Republic, Naboo Royal Guards" and its only location is "Naboo".

The Databank does, however, note that the Starfighter does also appear in:

On another note Incredible Cross-sections of Star Wars, Episode I - The Phantom Menace has the following description which further emphasises the vehicle is only used by the Naboo. 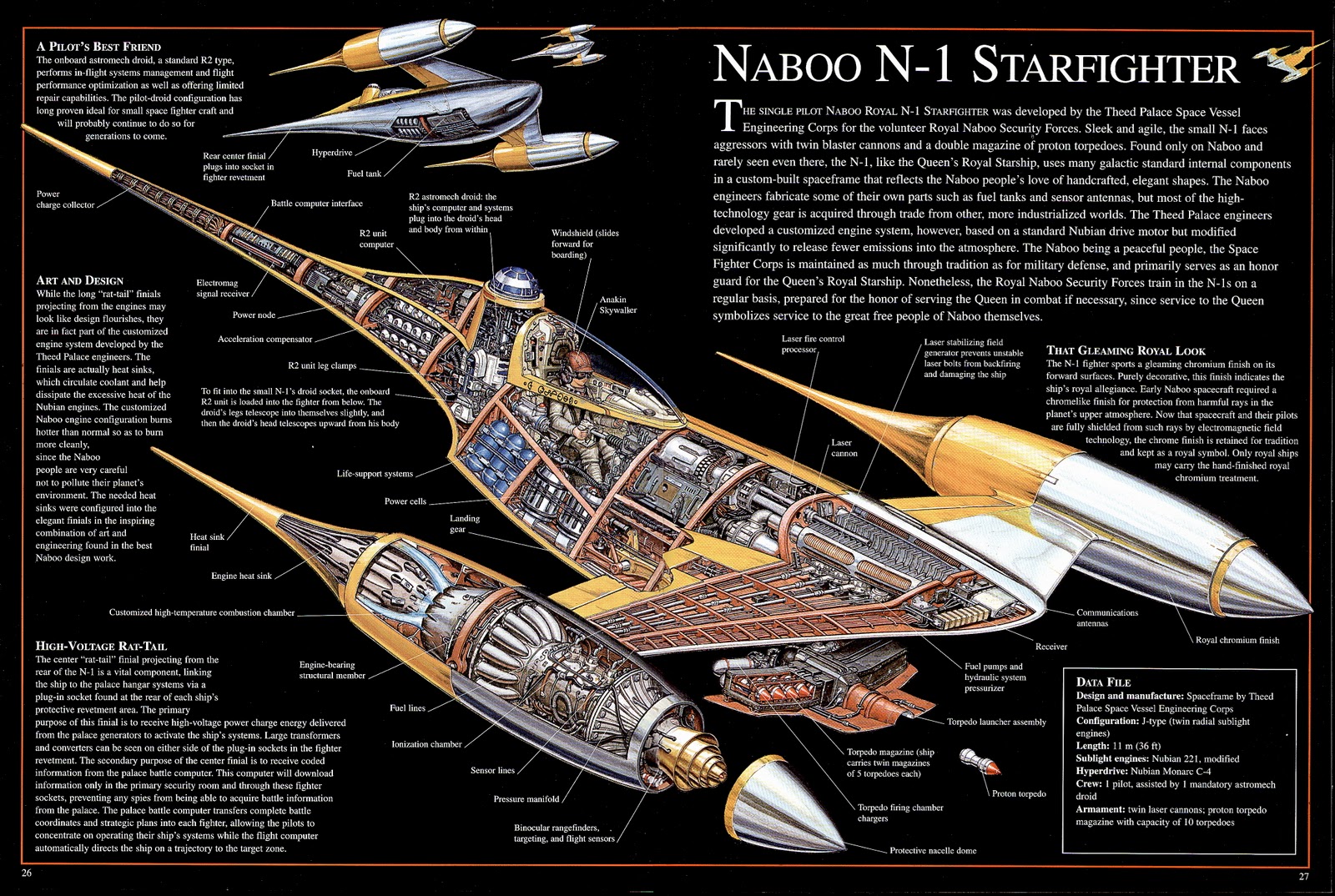 Found only on Naboo and rarely even there, the N-1, like the Queen's Royal Starship, uses mainly galactic standard components in a custom-built spaceframe that reflects the Naboo people's love of handcrafted, elegant shapes.

The Naboo being a peaceful people, the Space Fighter Corps is maintained as much through tradition as for military defense, and primarily serves as an honor guard for the Queen's Royal Starship.

For the record, we do see them in several other films.

Padme flies one in Episode 2: Attack of the Clones.

and they make a brief appearance in Return of the Jedi (2004 cuts onwards).

They also appear in numerous The Clone Wars episodes.

As to why they're not used by the Rebels, the Ultimate Star Wars factbook indicates that the N-1 was made exclusively by the ...

... presumably for the sole use of the Naboobian Defence force. Since Naboo wasn't a Rebel-supporting planet and remained firmly in the hands of the Empire until well after the death of Palpatine, there's little chance that they'd be making ships available to the Rebellion.

Additionally, the planet had a reputation for being pacifistic and wasn't in the business of arms sales to either side.

An N-1's armament is comparable to an A-wing's : 2 laser cannons, 2 launchers (but N-1s have protons torpedoes which are better than an A-wing's concussion missiles). X-wings however beat both of those hands down, with their quad linkable lasers and twin proton torpedo launchers.

The speed of these vessels is really the only thing to look at imo (because it was the only thing that really mattered in the game they called X-Wing... which was called that for a reason: they're not the most armed ships in the fleet, but they are the best):

N-1s can't outrun an ambush by an X-wing, and they can be quickly overtaken by an A-wing. In a stand-up fight verses an A-wing it might be more or less evenly matched, but against an X-wing (pretty much anything except a B-wing; 3 lasers, 3 ion cannons, and torpedoes) would be suicide.

33
Why was a Nebulon-B medical frigate at the Battle of Endor?
30
How big is the Executor, based only on film evidence
7
Why do Star Wars B2 Battle Droids only use one arm?
20
If Darth Vader discovered Luke was his son from the Emperor in the 2004 retconned version of “The Empire Strikes Back”, then how did the Emperor know?
34
Does this cut material from Rogue One still appear in the novelisation?
13
Why do ARC-170 Starfighters look like X-Wings?
9
Has anyone else ever flown Sabine's TIE fighter from Star Wars Rebels?
5
Why different shapes on Rebel Alliance starfighters?
7
Did Obi-Wan Kenobi know how to destroy the Death Star without the help of the stolen plans?