Story about a man who lives serially in other people's bodies

The story I recall is told from the point of view of a protagonist who wakes up every day in a different person's body. Always a man, always in the same city. He does not have access to his "host's" memories, but muscle memory sort of works. So if he needs to open a door, the body will start to move to get keys, that kind of thing. As a result he tries to avoid interacting with people who know the person. If someone tries to talk to him - his host actually - he will try to dodge them or make an excuse to leave.

He almost never tries to live any of the activities in the life of his host. He just gets up, leaves wherever he wakes up, and does his own things. He has a locker that he keeps his own stuff in, and he often spends time at the library.

He comes to the realization that not only is everyone he is inhabiting the same age, they were all born in the same city. So he suspects that he - whoever "he" is - must have been born then and there as well.

One day his host is a doctor, and this time he actually dresses as the doctor and goes to the hospital. He finds a man, the same age, comatose. He has been comatose for years, maybe from birth? Perhaps there was some kind of accident or event? But the comatose patient's brain always shows a certain amount of function, as though it were continuously forming memories...

This last is much less clear, and I may be conflating another story, but I remember that his (the patient's) father may have been doing experiments on him. As in, inserting tubes into his head and extracting a portion of his brain each day. So the ability to use the brains of others around him was an adaptive trait from a desperate attempt to survive that.

It feels to me that this is something I probably read in Analog in the early-to-mid 90's.

This is "The Safe-Deposit Box", in Greg Egan's short-story collection Axiomatic. 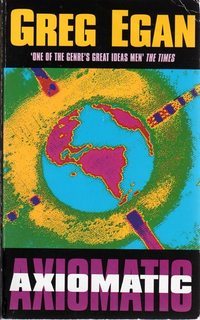 It turns out that his father had been a mad neurosurgeon, who as you say decided to experiment on his infant son's brain by removing it bit by bit.

The Wikipedia entry for Axiomatic says this about the story:

A man inhabits the body of a different person every time he wakes up, and has lived this way his entire life.

As noted in the comments the story was originally published in Isaac Asimov's Science Fiction Magazine, September 1990 and can be read at the Internet Archive.

5
Book about a person with no physical body, being someone new every day
7
Looking for a serial-body-swapping story that is NOT Levithan's "Every Day"

9
Scientist that creates a potion that slows down his perception of time and dies of old age at sunset
15
Identify Title & Author, old short story about a man who becomes "unnoticeable"
21
Short story about amnesiac man sent to a prison planet
10
Short novel about man who can control reality
12
Seeking Name of Lovecraftian Short Story About Ancient City In The North