Book about a girl with purple eyes whose father was a (prince?) alien from a different world

Not a lot to go on, but possibly Ian Irvine's "A Shadow on the Glass", the first book in "The View From the Mirror" quartet.

From the minimal clues provided:

Book about a girl with purple eyes whose father was a (prince?) alien from a different world.

Check. The protaganist, Karan, had purple eyes signifying she was descended from a Charon, a race from a different world. Her father was, I think, one of that race.

I think the cover was either a greyscale purple eye or a purple crystal.

She met a boy from the other world who was a prince(?).

Half a check. Early on she meets Llian who's neither a prince nor from the other world. They spend most of the series together.

She was hunted by people from the other world as well

Check. Due to her Charon nature, she was pretty much hunted by everybody

Not a complete match, but given that the question is a bit terse, still worth putting it into an answer: Stargazer (2014) by Melanie Matthews?

Ava is an anomaly. She has the appearance of the enemy alien race known as Stargazers, with her lavender hair and eyes, but the human capacity for love and forgiveness. Ava has amnesia—not knowing who she is or where she came from. She rejects that she’s a Stargazer, but she isn’t entirely human either, with the strength to crush a man’s bones. The key to everything lies with the dictator Julius Pallas, who orders her torture and imprisonment inside the doctor-ridden mega-facility known as the Corporation. When the two finally meet, Ava will discover her true identity and her connection to him. He’ll discover how greatly she’s changed, and how her destiny may just ruin his murderous empire. 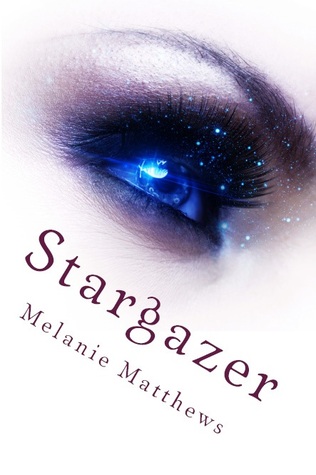 Not sure if checks:

Found with the Google query book "purple eyes" alien prince site:goodreads.com and looking at the Google Images results, the cover looked promising as it partly matched.

Since the beginning of time, tales have been told about Eden. But all the stories are wrong.

Running parallel alongside Earth, but never touching, there exists not just a garden, but an entire world of vivid colours and breathtaking beauty where the Seraph reside.

After a universe shattering revelation, she discovers why. Far from being the nothing and no one, with no past and no future, that Jazmine had always believed herself to be, she discovers that she is in fact an heir to one of the seven remaining Seraph Dynasties.

She is Jazmine Evenstar, the last heir to the sovereign Evenstar Dynasty.

3
Book about a boy meeting a girl on an alien planet where he crash-landed
9
Sci-fi book about this girl with purple hair and some others travelling into space
3
A fantasy book about a woman who can speak with animals and is taken by the prince?
6
Book series with a cover of a girl with unusual eyes, who receives a crystal ball
5
I remember reading a book a few years ago about boy transported to a alien world, need help finding
12
Fantasy book about a judge with purple eyes and a case with a sex drug that kills if there's no love
5
Young adult book about a girl who goes to live with her dead mother's people, who are aliens
6
Book about a girl who has purple eyes and wakes up in an airplane crash