Book: thief called Mar is hired by one of his targets to search the remains of an old civilization for magical artifacts; discovers he can do magic

I remember reading a book a couple of years ago, and cannot, for the life of me remember what the book is called. I believe this spans multiple books.

The book followed the main character, I believe his name was Mar, through his life. The book starts out describing him as a thief in the city, he eventually tries to steal from some man, but the man catches him. Instead of reporting him, the man who caught him realizes that he has some innate talent, so he asks him to help him during his job. His job was to search the remains of an old civilization looking for magical artifacts, the first of which he finds is a scroll inside a metal tube.

After this I can’t remember what happened but he somehow gets stranded on a weird island with a decrepit castle. On this island he finds he can do magic and starts to make a raft out of spheres that he forms from sand. He then finds he can fly on this raft and floats over to a city which he finds under attack by the main antagonists, some religious group that likes to hoard magical artifacts from the old world. He saves this group with his newly acquired magic and they pronounce him king.

Could this be Orphan: Key to Magic I by H. Jonas Rhynedahll? 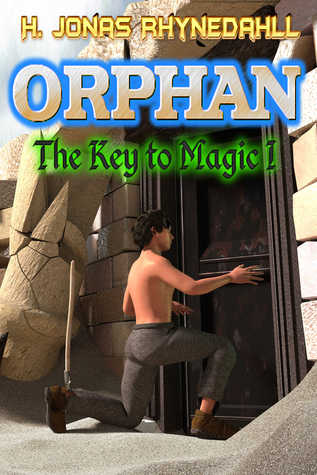 Mar is born into an age in which magic is a mathematical science, in which technology is simply another word for magic. To escape a world wide cataclysm created by sorcerers who cannot resist the lure of ultimate power, the infant is cast into a distant mundane future. In this powerless age, Magic has become nothing more than a despised fanatical religion and those who practice Magic are persecuted, hunted, and killed. In order to escape a destiny that magicians long dead have written for him, Mar must learn to use the inborn abilities that make him the last true master of magic. Orphan is the first book in the epic fantasy series, The Key to Magic.

8
Identify a book and sequel about Mattias Hand, inventor and Prince who is exiled
2
Dream Train? Looking for a Book
6
Fantasy novel involving a painter
8
Fantasy book where in the end, a crippled exiled boy becomes king
4
Science Fiction Book about Guy who scavenges shipwrecks
6
Book with Man Conquering Cities, Settling with Wife, and Returning to Face a Copycat Villain
6
Looking for Fantasy book about Fish/Whale Oil