A long time ago, probably 30 years, I saw a movie which I enjoyed but have not seen since. It may have been a TV movie. It wasn't Oscar worthy but it was unusual. Most movies are just the same basic tales; the heist, the quest, the love story, fighting an oppressive regime etc. This was different, it was a strange blend of western/buddy movie/horror/supernatural.

These are the scant details I can remember:

Two guys are travelling home, on horseback, after the American Civil War (I think) and rescue a blonde woman from some kind of grim situation. They're in a mountainous area. The woman is mute, possibly from trauma... possibly not; so they decide to take her along with them. Strange things start to happen and I think both men ultimately die. At the end of the film the woman turns into an eagle (yeah really). It turns out she's some sort of ancient spirit beguiling and ultimately preying upon unwary travellers who stray into her domain.

Like I say it's not a great movie but it's refreshingly different enough from most other movies to be an unexpected pleasure.

I can't find it on IMDb because I can't remember any of the actors but the two males leads made an impression. They did a very good "buddy" act so you were rooting for them to escape/survive.

Two former Confederate captains set-out to recover diamonds hidden in the mountains of Arkansas but a native spirit named Chikara is said to protect the sacred mountains against intruders.

The review at Moria Reviews gives a bit more of a description:

At the end of the American Civil War, the dying Virgil Cane tells Southern Captain Wishbone Cutter about a cache of diamonds hidden in a cave along the Buffalo River and the route to get there. Returning home, Cutter finds his wife has left him for another man. He sets out with his Irish-Cherokee companion Half-Moon O’Brian and geologist Amos Richmond to find the diamonds. Along the journey, they meet a young woman Drusilla Wilcox, the only survivor of a massacre by Indians, and take her with them. As they head up into the mountain, Half-Moon realises that it is the Mountain of Demons, which is cursed by the spirit of Chikara who promised to kill all who ventured into its domain.

The full film is available on YouTube here and from a quick skim I'm not entirely sure if she is the eagle or just connected to it. 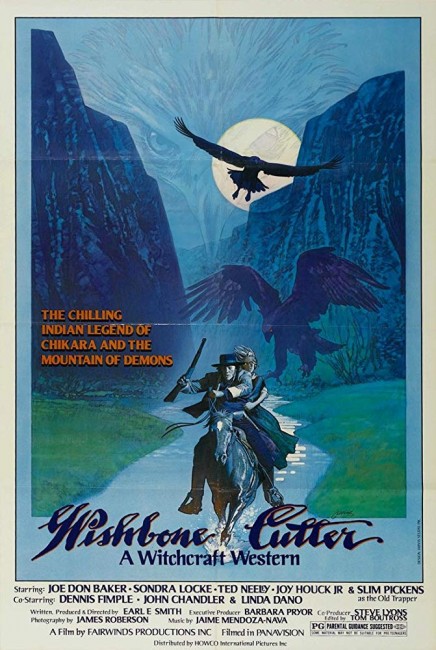 As you can see, the poster uses a different title. IMDb includes an extensive list of alternate titles:

Not the answer you're looking for? Browse other questions tagged story-identification tv horror western or ask your own question.

13
A TV Movie where a guy turns into a cyborg?
4
Unknown VHS sci-fi western-style cartoon movie from the 80s/90s
3
Book with woman with supernatural powers forced into slavery
11
Short story with twist ending where astronaut wakes up to find alien poised over his body?
7
Movie about androids with a western theme
6
Movie where a circus ringmaster turns people into animals
5
Movie with “White box dimensions” where woman is shot at the end
6
TV/movie where a routine battle response drill on a spaceship turns into an actual battle