Is the age of Tony Stark consistent with the appearance of his father in the Captain America movie?

Nick Fury told Captain America that he has been "asleep" for nearly 70 years. If Dominic Cooper was playing Howard Stark Senior (grandfather of Tony Stark) then it is fine, but if he was playing Howard Stark (father of Tony Stark) then after 70 years he should be around 90 or above. Tony Stark, his son, should be 60 to 70 years. Is that possible? Tony doesn't look 70 years in The Avengers.

There are some plot problems, but not based on the assumption that Tony Stark was born when Captain America was frozen in ice. In the movies, we don't know Maria Stark's age when she had Tony; in fact we don't see her at all.

But we do know the following:

In the first Iron Man movie, we learn from a newspaper clip that at age 17, Tony lost both of his parents in a car accident. The date of the newspaper is December 17, 1991. That would place Tony's birth around 1974.

However, in Iron Man 2, Tony is looking at some old film footage of his father. The film is dated 9-15-73. Yet later we see a young Tony Stark playing in the background. He appears to be between 5-6 years old. This would put Tony's birthdate maybe around 1968.

So there is a bit of a problem as to when Tony Stark was born with these movie screens, but Tony Stark's birthdate is in the 1968-1974 range, which puts his age at the start of the MCU between his very late 30s and early 40s, which seems to be about right.

World War II took place between 1939-1945. In Captain America: The First Avenger, Howard Stark appears to be in his 20s. So he would be in his early 50s when he had Tony. He also looks that age in the Iron Man 2 old film footage. At his death in 1991, he would be about 70. This all seems about right considering how Robert Downey Jr. looks and portrays Tony Stark in the movies. And again we don't know Maria Stark's age, so she could have been much younger than Howard Stark.

To answer your question, the timeline of ages is about right, despite not having Tony Stark's real birth year.

This is an issue that the films inherited from the comics. In the comics, some of the characters have been in use for half a century or more. To avoid having everyone get old over that time, Marvel uses a sliding timescale. So Tony Stark is perpetually an adult in the currently-published comics, even though this has been the case for decades. The timescale breaks down when you have fixed reference points in this timescale.

World War II is one of those reference points. The in-universe importance of Captain America, and the wealth of fiction that has been written around him causes issues. In the real world, WWII was ~70 years ago and increasing. So a character who in the 60's was written to be a child of someone who is linked to WWII, it makes perfect sense at the time. But over the decades, that link to WWII makes less and less sense in the real world, as the character from the 60's has their personal timeline dragged into the future while the WWII link is perpetually fixed to the real life WWII.

This is what happened with Tony and Howard Stark. Tony's the child of Howard, and this was established decades ago. In Tony's personal history, his accident that resulted in him creating the first Iron Man suit has been updated over the years:

Writers have updated the war and locale in which Stark is injured. In the original 1963 story, it was the Vietnam War. In the 1990s, it was updated to be the first Gulf War,[12] and later updated again to be the war in Afghanistan. However, Stark's time with the Asian Nobel Prize-winning scientist Ho Yinsen is consistent through nearly all incarnations of the Iron Man origin, depicting Stark and Yinsen building the original armor together.

However, they haven't altered the father-son relationship of Howard and Tony. They could have brought Howard forward in time, have him be a government defense contractor during the Cold War, Vietnam War, Gulf War, etc. But doing so means he would no longer be linked to Captain America's origins. Alternatively, they could retcon him into being Tony's grandfather, and introduce a new father for Tony. Rather than alter continuity in some fashion to fix this, Marvel's let the issue fester. 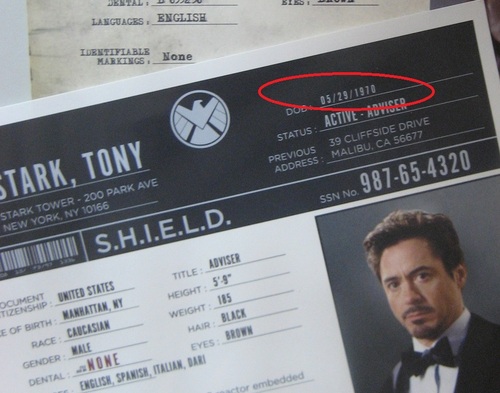 Which makes Howard 53 years old at time of Tony's birth, which is completely biologically possible and narratively probable given his age in the video from 1974 as shown in IM2, when Tony would be around 4.

This article from IM only says that Howard's son graduated MIT when he was 17, which implies that he is older than 17 at this point. 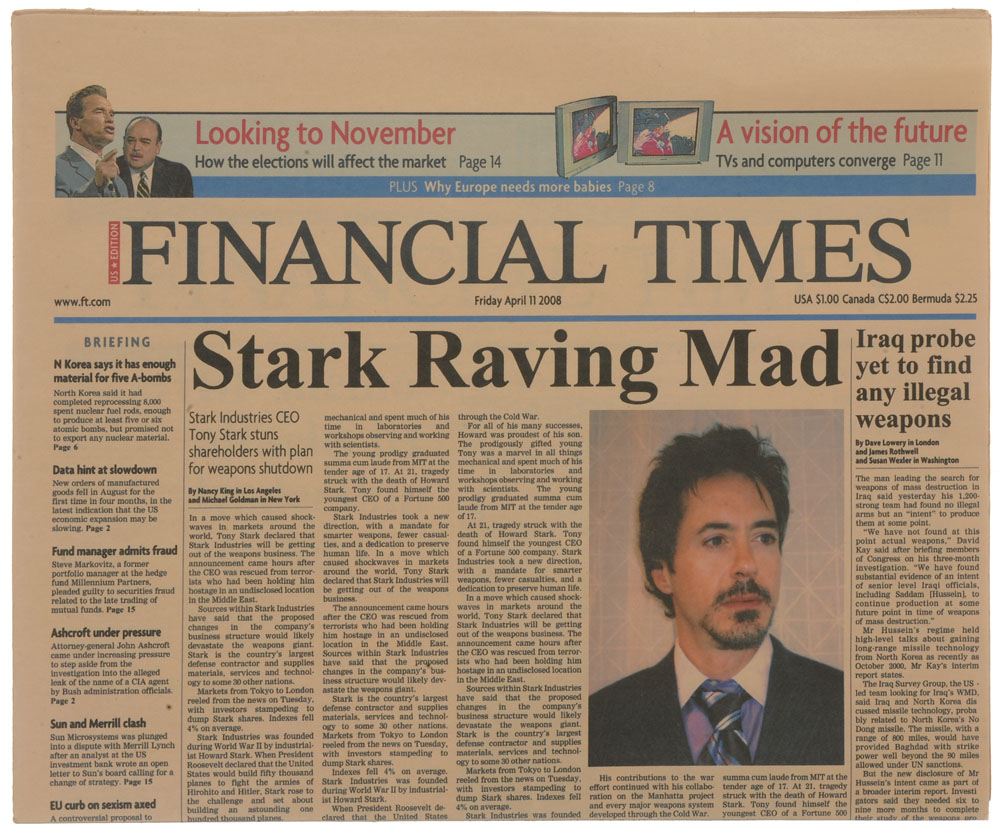 And this article explicitly puts Tony as 21 (in the 3rd column) at time of Howard's death.

So yes, Tony and Howard's ages are completely internally consistent.

Howard had Tony at the age of 53. Tony became CEO of stark Industries, thanks to Iron Man 1 during the short presentation when Roddy should give at Tony his award. So, we could guess that in Avengers 1, Tony is 42. So in 2014, he is 44. Maybe Maria was younger than Howard, which it's not a surprise. Howard is describe as a playboy. We could easily picture him as someone who love young ladies whatever he's age.

Not everything in the movies are the same as the comics. In the comics, Pepper dated Happy, not Tony.

Within the Marvel Cinematic Universe (and Marvel in general) there are different Alternate Universe; aka things that may change according to the comic or the movies. There are comics where Pepper dates Tony and other that they don't like the fact that in Comic Ultron was created by Hank Pym not Tony Stark

I'm saying this because in the comics Tony is the adoptive son of the Starks due to the fact that they couldn't have there own and in another they had a son but there were complications, etc and still they adopted Tony.

I might be wrong but to this day I haven't seen somewhere that says that in one of the universe he is a biological son... so in context with the question it can be because since he is adopted they could have been both; e.g. Maria and Howard in there mid 40's and still adopt him and, yes, that was Tony's father.

It is not actually true that men do not decline in fertility... if fact they do. it becomes more and more difficult as they get older. by the time Howard was fifty ( and if her were trying to father a child ) it would take an average of 12+ months. I was curious so I looked at some men's health sites to see if there was a decline. as for women they on average go through menopause at 51 years of age. Since Howard Stark was portrayed as a player this last bit is more or less unimportant... Maria could have been much younger. Please note that the chances of a woman getting pregnant decreases significantly after the age of 30 with an increasing number of birth defects. these taken together mean that Tony Stark was fairly close to being a miracle baby.

According to me, it's a great deal to find his real age. But to find this I had read several article and blog post of people about it. Many have claimed that he belongs to a different planet, so he is forever young like the Asgardian Avenger, Thor.

As we all know, when Captain America wakes up after 70 years, he is as young as Thor. All the Avengers had visited different planets with Thor, and that's why they are ageless forever young people. That's why they are showing the same age of Tony Stark.

I also think that like the shapeshifters can change, he can also change his age. So now Tony Stark is in his thirties or maybe in histwenties. After all, he is a great person and the centre of attention everywhere. He is wise, hardworking and knows how to handle all the limelight.

I think that the same case was with his father. I mean not exactly the same, but almost the same, because when he become the father of a child. he was 50. That's weird. Maybe this is the cause of their inventions as they both are great inventors. We know about Tony's breakdown when his whole nervous system was under the control of his ex/former-lover (I forget her name). He has rebuilt it again, so I think he also done something for his age after at all his assets has gone through several breakdowns and he has rebuilt it.

So according to me, he is forever young.

But also a man can become a father at really any age after puberty. I mean a woman's eggs kinda go bad around 35 or 40 but a man can father healthy children up til his seventies and beyond. So the mere fact that Howard was in his 50's doesn't really matter.

I been reading the Marvel NOW! Iron Man comic, in which he mentions that he's in his thirties, so I guess he's 38, 39 maybe?

Oh and yes, he's adopted. He was used as a decoy to hide his brother Arno Stark. Also, Malekith tells Stark that he's a changeling.

Well, actually, the comic books say Tony is adopted (just check Wikipedia!) So really he could be ANY old age, so long as Movie Tony is the same as Comic Book Tony, know what I mean?

1
How old is Tony Stark in the first Iron Man movie?