Anime: main character equips a horned helmet to fight monsters/criminals, pulls out a sword from his arm

The main character is a man/boy around 16-20 years old, the story takes place in a city, and is about fighting monsters, criminals, aliens. I know that he equips a helmet and transforms to battle them, the transformation is similar to Iron Man, and the helmet looks like a motorcycle one with 2 horns (one of which is broken), I think.

I remember one episode where he is fighting one monster/alien on the roof of a building and loses the battle, until he absorbs an antenna in his arm, then pulls out a sword from that arm.

Possibly a long shot as the armour isn't particularly Iron-Man like, although the armour gets more armoury in the later episodes. 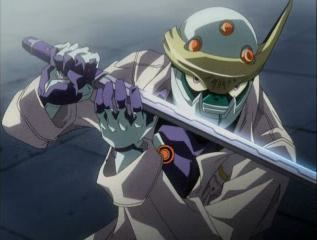 The helmet is all that is left of a sentient robot that is trying to capture escaped alien convicts and teams up with the leader of a local motorcycle gang to carry on it's work when it's body is destroyed.

The protagonist uses a bokken (think metal pole with a sword handle) that is created by the helmet (I can't remember the exact circumstances).

The helmet starts off with a broken horn, but gets fixed as it upgrades throughout the series.

The original release date of the 10 episode anime was 2001.

I re-watched a few episodes and there is a scene where the protagonist has a fight with an alien on a rooftop where his bokken is broken. So an antenna on the side of another building is absorbed and transmuted into a new bokken which is used to destroy the alien.

2
Anime: Dying alien robot merge his head with an human and gives him armor to keep fighting