What work of SciFi or Fantasy was the first to depict small scale removable computer data storage media?

Star Trek TOS was using single handed removable read/write memory media (like the kind William Windom is holding below) before the floppy disk was even invented. Was Star Trek the first, or was a different work of SciFi or Fantasy the first to depict small scale (pocket sized or smaller) removable computer data storage media? 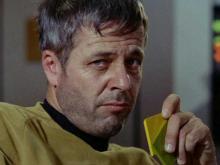 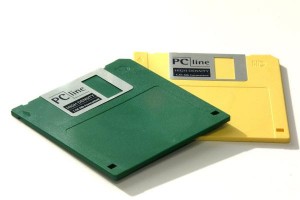 “Since nothing material was destroyed when the Eddorians were forced into the next plane of existence, their historical records have also become available. Those records - folios and tapes and playable discs of platinum alloy, resistant indefinitely even to Eddore's noxious atmosphere - agree with those of the Arisians upon this point.”

This is a stretch, but Isaac Asimov's Foundation had the concept of a "personal capsule" but this was more of a physical, "eyes-only" message on self-destructing tape, not data to be read by a computer (visiplate) per se.

However, this was data separate from things communicated via "ultrawave" which is apparently how most communication occurred.

This was mentioned in "The Traders" which was first published in October 1944 (published collectively as Foundation in 1951).

"…so they sent me out after you with this."

The tiny, gleaming sphere changed hands, and Gorm added, "It's confidential. Super-secret. Can't be trusted to the sub-ether and all that. Or So I gather. At least its a Personal Capsule, and won't open for anyone but you."

It opened in his hand and the thin, transparent tape unrolled stiffly. His eyes swept the message quickly, for when the last of the tape had emerged, the first was already brown and crinkled. In a minute and a half it had turned black and, molecule by molecule, fallen apart.

Not the answer you're looking for? Browse other questions tagged technology history-of or ask your own question.