I'm trying to remember the name of an old scifi movie. Here are the things I remember about it:

Three military officers in solid red uniforms with no other markings or identifications of rank on them except some ribbons on their left chest.

They have revived a dead man who was a spy for the former USA.

They are doing this to ascertain what happened in the 20th Century that he did to start a nuclear war between the East and West.

These military officers have built an old cabin in the woods and rebuilt some old cars from the 60s. The put the unconscious man in one of the cars and wake him up as they act like they have all robbed a bank and the police are chasing them. They pose as bank robbers and bring the man to this isolated cabin.

The man is confused, but he goes along with them and believes that he is back in his own time in the 20th Century. When he gets tired and goes to sleep in one of the rooms, the military officers hook him up to a mind reading machine to see what he is thinking and what happened to him in the past.

They find out he was a pilot or spy and he was captured by the Chinese. They suspect he had some role in betraying the USA and caused World War 3, but they are not sure as their mind-reading device doesn't give them complete information.

Eventually the man gets suspicious about being forced to stay at this cabin in the woods and what his fellow criminals are telling him. So, he sneaks away and finds a woman wandering in the woods who works at a local factory.

The guy learns that he is not in his own time period in the 1960s. He is actually much farther into the future, although we don't know exactly when. He is tracked down by the military and killed. So the military officers have to keep his brain in a large petri dish and keep scanning to find out what happened.

Great movie, just can't remember the title or what happened at the end.

Here is a plot summary from IMDb.

A spy is brought back from cryogenic suspension after being almost killed in a plane crash returning from a mission to learn about a deadly new weapon being developed in the East. But the vital memories are being suppressed, so the authorities use ultra-advanced technologies to try to uncover the secret.

Here is a still photo of the men in red uniforms with the insignia on their left chests. 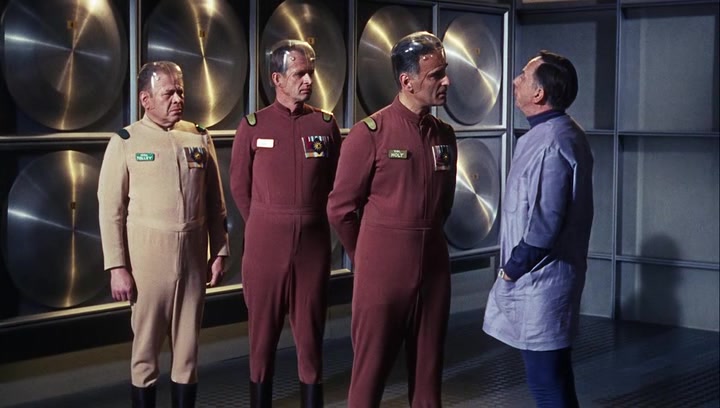 9
Old sci fi movie where something crashes through the roof of a diner with teens dancing?
4
Story identification: Singer somehow ends up in a fantasy realm with elves (and stuff)
14
Movie ID: 50s/60s time travel film with *terrible* plot holes
23
Trying to find the name of the movie where young men entered a cyber world and meet a girl with pink hair
5
Movie about a hero on a bike with a laser gun who saves a village from gangsters
53
A universe not quite like ours
13
Short story about a man who runs into his wife from the past?