What makes Hell "so much worse" after the angels take over? 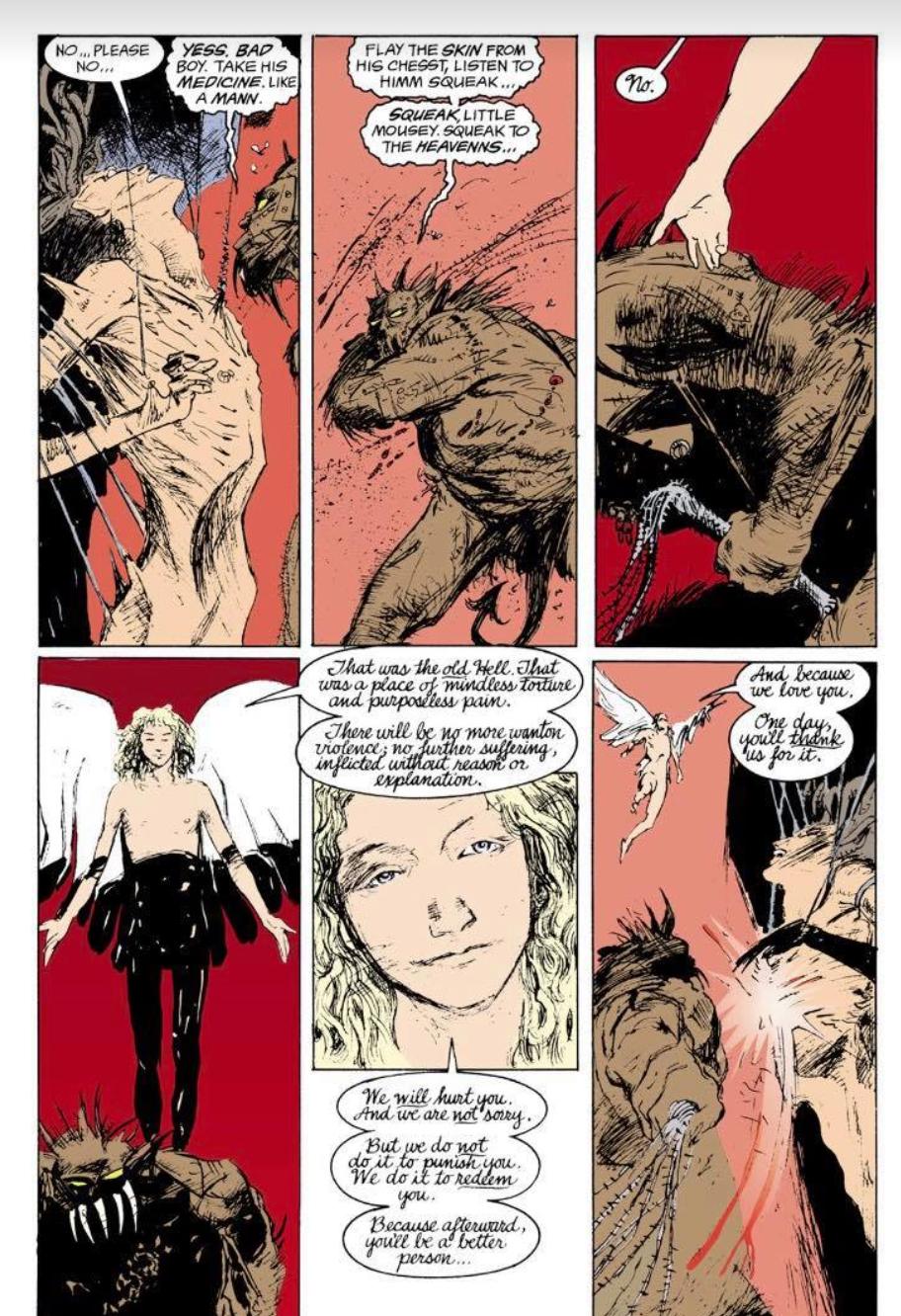 In the Sandman, Season of Mists 07, after Lucifer gives the key of Hell to Dream, he gives it to the angels. At the end of the issue, one of the angels come up to one of the demons and says that he should not punish people for punishment's sake, he should punish them for redemption.

That was the old Hell. That was a place of mindless torture and purposeless pain. There will be no more wanton violence; no further suffering inflicted without reason or explanation.

And the person who is getting the punishment says:

The comments from starpilotsix and Keith Morrison are both plausible readings. But there's a specific aspect of Gaiman's depiction of Hell that may be relevant too.

While he's closing down Hell and getting ready to hand over the key to Morpheus, Lucifer explains that the inmates are only there because, either consciously or unconsciously, they think they should be there. Lucifer and the demons didn't demand for them to be brought there, and don't care about their sins at all; but since they are there, and the demons are sadistic monsters, they get punished. One soul (an ancient ruthless dictator) insists that he should be allowed to stay, because of how horrible his crimes were, which seems to be his way of convincing himself he's an important person; Lucifer says no, nobody remembers you and your crimes weren't that big a deal, and he disappears.

So it's possible that the person you're talking about was afraid that under the new system, what's happening to them would no longer be controlled by their own beliefs about their sinfulness, but by someone else's - and that the idea of becoming a better person was threatening to their whole idea of who they were.

I'm not 100% convinced, though. Gaiman didn't try too hard to stay consistent to that idea - I don't think he was all that interested in the concept of Hell. So it may be that it was just about what those two commenters said; certainly that particular angel seems like a smug jerk.

It's like when someone truly wounds you and then tell you "It's for your own good". It's easier to never think about pain, suffering, in the "why". The purpose. But here they are told directly that it truly is for their own good.

It's because of a host of things, but purpose in it's most abstract form is why.

Why are they getting punished? Because they feel they have too, that they deserve it. The cruel King even starts to weep because of how important this feeling it. How strong it is.

A true sensation of self-hatred, of despair, of being that monster that they've come to see themselves as. The monster that deserves this treatment. That they're there because they have to be, because of this.

The Angels tell them that yes, it is true.

16
What happened in Hell to get Lucifer's rule challenged?