Web comic about an adventurous dog and his human sidekick

Back around the mid-late 2000s I discovered a web comic (it could have been a scan of a physical comic) about a dog and his boy who go on adventures, either in space or underwater - perhaps both. I say 'dog and his boy' because the dog could talk and it was possibly the smarter of the two. I think they had their own craft, either a spaceship or a submarine.

It was full-page with a mixture of large images along with smaller panels, was colourful and quite detailed, and to me the artist seemed quite talented. Stylistically I'd liken the characters to Peanuts - the protagonists had small bodies and big heads, the dog had a black circle for his nose. I recall some quite epic set pieces too, reminiscent of the larger Calvin and Hobbes Spaceman Spiff strips (which were quite possibly an influence).

The boy had a non-typical human name, like Zippy or Moppy. Every few weeks a new page would appear, but after several it just stopped.

And here it is - Copper - I'll be interested to see how well my memory served me.

In each self-contained story the boy Copper and his talking dog Fred journey through a detailed but economically drawn landscape - sometimes beautiful, sometimes bleak, sometimes surreal. Fred usually has some concise and forcefully expressive comment to make on their circumstances, while Copper is generally more cheerfully optimistic. The first three strips suggest that their adventures are dreams. After that the question is usually left open.

"Maiden Voyage" sees Copper building an airplane from parts purchased at the local Plane*Mart supermarket, while Fred constantly frets that the plane might crash. In the end his fears turn out to be justified. In "Picnic" Copper and Fred take an aerial picnic in an airship, which Fred manages to sleep through. In "Mushroom Crossing" Copper and Fred cross a canyon, but Fred ends up falling into the canyon and finding himself with talking mushrooms, who let him back out of the canyon after yelling at him.

It can be read on the artist's web page here.

The date is a bit later than you suggest and it appears in the comic run (of only 4 issues) they are travelling through time not space or underwater but it does seem to match relatively well. From a quick skim of the first issue Mr. Peabody is indeed smarter than the human sidekick and does create a ship... The Wabac Machine!

It also seems to match the style you remember with the characters having overly large heads, being colourful and with big scenes and smaller panels inserted. Mr. Peabody also has a black circle for his nose. 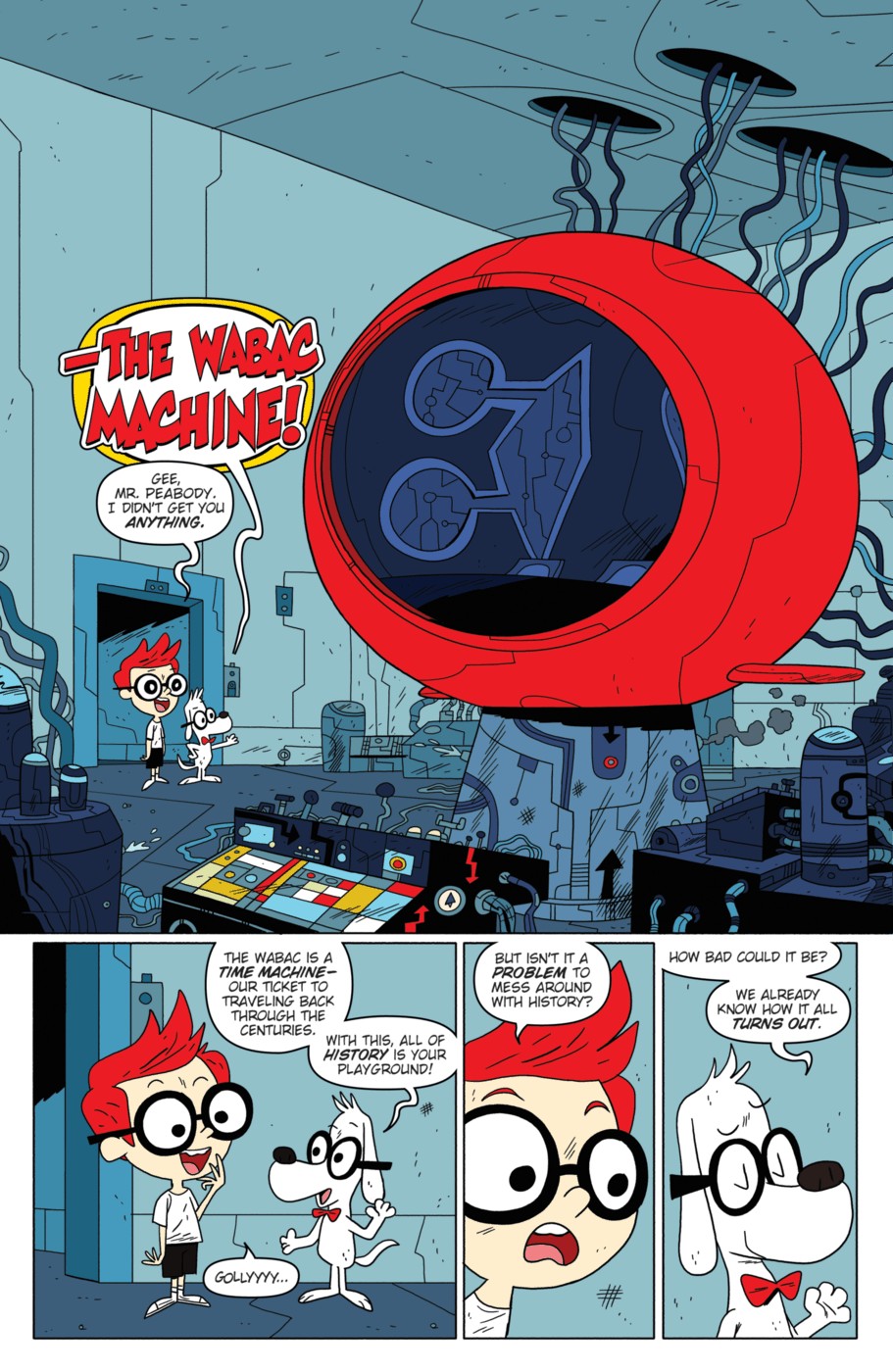 Not the answer you're looking for? Browse other questions tagged story-identification space soft-sci-fi webcomics or ask your own question.

4
What is the name of a web comic strip that makes a joke of Artificial Intelligence?
4
Comic strip about a human dressing as a robot and trying to infiltrate
11
Webcomic following a boy who's inhabited by a vengeful ghost who's after the men who killed her
5
Book about a young man with a cat sidekick