Animated film about a society's offering for gods

I watched this film on Cartoon Network India sometime between 2005-10.

The society, situated amidst a jungle of sorts, has a recurring ritual to offer their produce to the god(s). It is very taxing on them but still they decide to do it due to fear of divine vengeance.

A teen girl refuses to accept it as a way of life and questions the whole enterprise. The rest of the story, IIRC, is about the tumultuous fight of girl vs god. There might even be human sacrifice involved but I'm not sure about that. The whole thing was CGI, no traditional animation. I recall a fight between the girl and a giant basilisk(?) near the end.

I looked up programming of CN India and other CN channels as well on Wikipedia and this movie failed to show up. Since I watched the Hindi dub, I'm not sure what the original language of the film was.

It'd be great if somebody could help me remember what it was.

This is Kaena: The Prophecy.

The film begins with an alien ship crash landing on a desert planet. The alien survivors, known as Vecarians, are quickly killed by the planet's predatory native inhabitants, the Selenites. The ship's core, Vecanoi, survives, and from it sprouts Axis, a massive tree reaching up into space. 600 years later, a race of human-like tree-dwellers have evolved living in the branches of Axis. One of them, a young girl named Kaena (voiced by Kirsten Dunst), is an adventurous daydreamer who longs to explore the world beyond the confines of her village. Kaena's inquisitiveness is opposed as heresy by the village elder, who commands his people to stay productive and toil for the villager's gods (who are, unbeknownst to them, the Selenites living in the planet below). 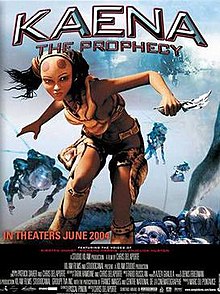 I don't remember a basilisk as such, but the main protagonist does face off against one of the Selenites in a shallow pool, and they are quite tall and lean over quite a bit.

The toiling is essentially gathering the tree nectar for the Selenites (the village's gods).

7
Animation about a tribe living on a (tree root?) tether between two planets