Book: boy meets a guy who gets killed, and escapes to a pocket dimension where inhabitants are versions of himself

It was about this boy who meets this guy. Something happens where the guy is killed by bad guys as the kid escapes to a pocket dimension.

It turns out that the guy and all the inhabitants are versions of himself, old, young, male, female, even a few animals(?). He is an outcast here and few people want to be kind to him because the guy who died was a popular mentor. They fight evil.

The cover had a red-headed kid on it, with people in the background flying through the sky(?). Anyway, the cover stood out in my memory because it was really stylized and bright, almost like a comic book.

InterWorld tells the story of Joey Harker, a very average kid who discovers that his world is only one of a trillion alternate earths. Some of these earths are ruled by magic. Some are ruled by science. All are at war.   Joey teams up with alternate versions of himself from an array of these worlds. Together, the army of Joeys must battle evil magicians Lord Dogknife and Lady Indigo to keep the balance of power between all the earths stable.

The Wikipedia summary has Joey meeting a guy called Jay, Jay dying and the other Joeys resenting the first Joey:

Joey approaches it and as Joey tries to free the mudluff, a giant serpent (Revealed in the second book to be called a Gyradon) appears, biting Jay. The mudluff kills the serpent but Jay was already dying. Before he dies he gave Joey the direction to Base Town, where InterWorld HQ is. [...]

Many of the other Joeys initially resented Joey for causing Jay's death, but soon come around about him as his skills improve.

And the cover has a red-haired kid and some flight-looking traits: 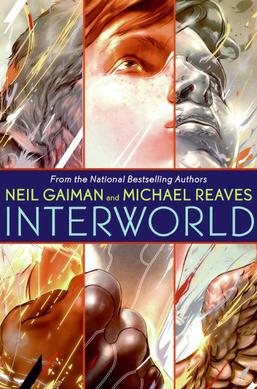 Found with the Google query book "* dimension" "versions * himself" site:goodreads.com.

8
YA book about a human girl who saves an cat-like elf guy, deals with racism and magic and a prophecy
11
need help finding the name of a book about psychic powers, aliens, and brain in a vat type plot
6
Book: modern post apocalyptic magical dystopia with Unicorns and Gryphons
8
Need help with finding a book series involving other dimensions
6
Book about a man who crashes on a planet and saves the princess with a magical weapon
16
Seed ship, unsexed person, cover has golden person attached to ship by umbilical cord
3
1990s Anime series where people fought in an alternate dimension. If the good guys won, the area where they fought was undamaged
7
Story about old video game console, a yard sale, and giant robotic cockroaches?
10
Space opera with large cat and discussion about infinite dimensions