What is that brown stuff around the planet Xahea?

In Star Trek: Discovery, Season 2, Episode 13, "Such Sweet Sorrow, Part I", another Red Burst™ leads the ship to the planet Xahea, home of Queen Me Hani Ika Hali Ka Po, who Ensign Tilly met in the Short Trek "Runaway".

It does not look like any Class M planet I've ever seen. It has some sort of brown ring around it, though it doesn't make a simple ellipse around the planet. It's more snake-like. 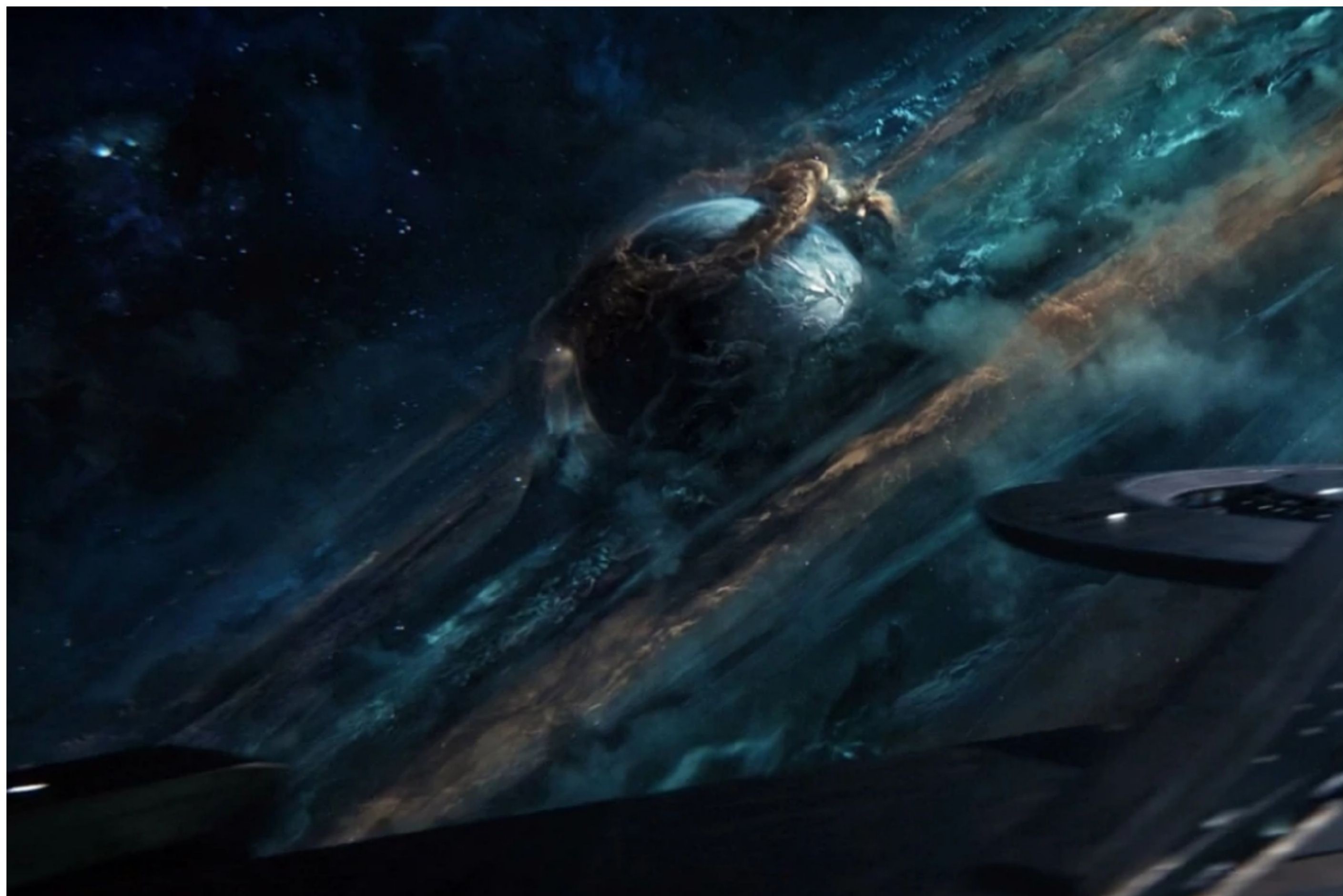 Assuming everything with that color is the same substance, I'm unable to think of any combination of forces that would create that shape.

Much less can I guess what the substance is. Any ideas?

My only partial guess is that it has something to do with dilithium mining. If that were a huge plume of waste from the mining process, and if that waste were electrostatically charged, then I suppose the planets magnetic field might draw the material to where it circles the equator like that.

Assuming everything with that color is the same substance, I'm unable to think of any combination of forces that would create that shape. Much less can I guess what the substance is. Any ideas?

Fire aboard a ship, two or three ships to be more specific.

From your photo (artwork) it's difficult to tell, and the same art backdrop is reused for the view on screen of Xahea and the sensor information:

It costs less to reuse the same artwork.

My only partial guess is that it has something to do with dilithium mining. If that were a huge plume of waste from the mining process, and if that waste were electrostatically charged, then I suppose the planets magnetic field might draw the material to where it circles the equator like that.

That we can rule out, there is no "plume" from the ground rising up into space from the equator. See these two similar closeups, one with Sarek's ship:

Note that the ring doesn't originate from the ground nor circle the equator.

The 'string' is a ship on fire leaving or crashing on the surface, it's travel speed (indicated by the smoke diameter) is constant, it's probably a crash. Notice that it appears to twist (like a spore drive?) and be traveling at a much higher speed the the other smoke trails.

Note the third plume with the large ball on the end (and the second white hot spot), that indicates that the ship is coming to a halt. 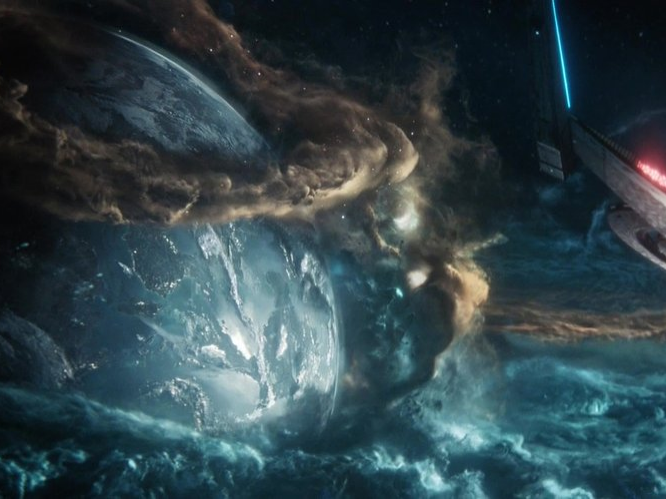 There might be a fourth plume (the smallest diameter) from the lower bright white dot passing under the upper one, at a constant altitude from the planet, leading to the largest blob of the ring; it could be part of a ship blown away.

Also notice the bright blue dot left of the lower white dot, it could be an engine; it appears to be the source of illumination of the circular spot on the planet. The planet's sun would light a much larger portion of the surface than such a small sector. The smoke ranges in diameter from a few to perhaps ten times larger than the white dots.

Here's the quotation from the webpage where those images were obtained ('Feed Format', rename by adding ".html" suffix):

"Is Sarek coming back?

It is not uncommon in Star Trek to have the heroes facing off against a powerful enemy alone, and we know that Control had infiltrated Starfleet subspace communications to prevent any calls for reinforcements. Michael’s adoptive father Sarek showed up halfway through that episode because he could track her using his special katric link. After he and Amanda said their goodbyes, they left before the battle with the Section 31 fleet started. Since Sarek is a high-level ambassador for the Federation and now knows exactly where this battle is going to take place, is he going to take his shuttle to Earth or any other Starfleet hubs to gather some reinforcements? If he doesn’t, he very well may be the worst dad ever.

Sarek’s shuttle left the Disco before the Section 31 fleet arrived, but will he come back with help?".

46
Why was the Narada drill at all necessary in Star Trek (2009)?
13
What's all the carrying PADDs around?
25
Did the creators of Into Darkness research Khan?
7
Was there any real-world inspiration for the DS9 episodes “Homefront” and “Paradise Lost”?
23
Who or what is that robot-headed crew member on the bridge of Star Trek Discovery's Shenzhou?
13
Is there evidence to suggest that Admiral Cornwell and Lethe are the same person?
3
Why does the Admiral tell L'Rell that the Federation has no death penalty?
7
What was the significance of the spore that landed on Tilly's shoulder in Discovery?
8
Has there ever been a warp / non-warp collision?