Who owns the rights to 'Valentine the Dark Avenger'?

Who owns the rights to Valentine the Dark Avenger? The only Wikipedia reference I can find is the following Dark Avengers listing which is definitely owned by Marvel.

It seems funny to me that it uses the name Avenger but it's not made by Disney owned Marvel.

To clarify I am asking who owns the rights to the character but if in scope also how they are able to use the word Avenger without potentially infringing copyright.

Worldwide character rights to 'Valentine' are held by Skylar Comics and their film division Skylar Pictures. The character was an original comic creation of Skylar producers Sarjono Sutrisno and Aswin MC Siregar and artist Ian Waryanto. Note that despite the words "Dark Avenger" being included in the full movie title, the character (and studio) are in no way linked to "The Avengers", a character mark held by Marvel Comics.

Valentine is the newest comic drama-action genre from Skylar Comics. The Valentine comic story idea emerged from Sarjono Sutrisno who was later developed by Aswin MC Siregar. The picture in this comic was entrusted to Ian Waryanto and the coloring by Warnia K. Sahadewa who had previously helped with the previous comic Skylar Comics project. 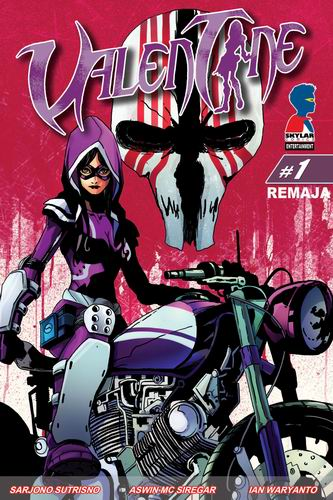 International distribution rights are jointly held by the producer of the new 2019 feature, Shout! Studios and Skylar Pictures

Shout! Studios has picked up the title, which is from Indonesian production company Skylar Pictures.

Disney/Marvel doesn't have the exclusive right to the name "Avenger" or even "Avengers" for action heroes. The British TV series The Avengers premiered in 1961, while Marvel's Avengers comic did not begin until 1963. In addition, there was a 1998 movie called The Avengers based on the TV series. We can add the 2006 TV movie Avenger, the 1984 movie The Toxic Avenger, the 1990 TV movie Dark Avenger and many more to realise that it is a very common word in titles, used even before Lee/Kirby created The Avengeers.

Not the answer you're looking for? Browse other questions tagged valentine-the-dark-avenger or ask your own question.