Years ago, I read a novel whose title I'd like to rediscover. What I can remember is this:

Some Googling tossed up The Demolished Man as a candidate, but I couldn't find a cover that even vaguely matched how I remembered it, and the plot's not a perfect match (though it does have an awful lot of similarities). Alternatively, I could be mis-remembering that book, but whence the cover? ISFDB doesn't have any that are even close, and I don't know any better places to look for what might've been an obscure British reprint.

Could it be Philip K. Dick's "Our Friends from Frolix 8" (1970)? It was about telepaths ruling the normals, and the cover sort of fits, but I don't remember the details of the plot that well. 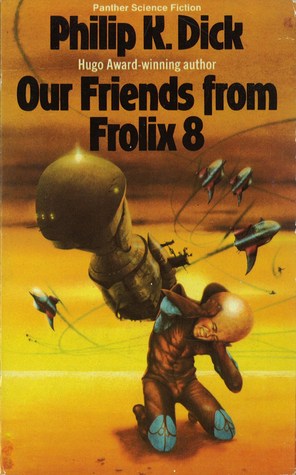 Not the answer you're looking for? Browse other questions tagged story-identification novel telepathy or ask your own question.

4
Identify a ghost story about a mirror in a hotel room, possibly in Ireland
6
DOS game with medieval knight in hell
26
Looking for a story where the protagonist defends against mind reading by repeating a counting-out rhyme
9
Short story about the drawbacks of human telepathy on an alien planet
6
Fantasy novel: dueling sorcerers and a damsel in distress
4
A movie where a man dreams he's a woman living an alternate life