I read this story a while ago, before 1990, probably quite a bit eartlier, and I suspect it is rather older than that (60s or 70s?). I think it was a short story, but I am not sure.

It is set in the future, and revolves around about six people who are on a tour of a factory or laboratory or similar. They are on a balcony or walkway, looking down on some device, the main exhibit of the tour. There is an explosion, the walkway collapses and they fall into the device (or its field). Most of the story takes place in the split second as they fall.

They find themselves in another world, and eventually realise this world is the product of one of the characters' imagination. Over the course of the story they visit a series of worlds, each one derived from the mind of a different character. I think the worlds are built from the character's subconscious, but the character can then control their world.

They escape a world when the character who controls it dies, and I think conclude they need to pass through all the character's worlds to get back to reality.

One world, from the mind of a middle-aged woman, seems nice at first, because she has banished all the bad things, but they realise she banishes too much, such as, I think, genitals! They (a man and a woman, the heroes of the story, I think) encourage her to banish more and more trivial annoyances, culminating in her banishing air, which kills her and so they escape her world.

The only other world I remember was that of a paranoid(?) man, who imagines cats that are inside-out because he so hates them.

Does this ring any bells with anyone? I had a search, but I do not think there are enough salient keywords to narrow it down.

Eye in the Sky, a 1957 novel by Philip K. Dick; also the (unaccepted) answer to this old question. Does any of these covers ring a bell?

The inside-out cat is in section XIII. The cat-hater is a woman:

Miss Reiss had never liked cats. She had been afraid of cats. Cats were her enemies.

The thing on the floor was Ninny Numbcat. He had been turned inside out. But he was still alive; the tangled mess was a still-functioning organism. Miss Reiss had seen to that; she was not going to let the animal get away.

While on a visit to the (fictional) Belmont Bevatron in the 1957 novel's near-future year of 1959, eight people become stuck in a series of subtly and not-so-subtly unreal worlds. The instigating incident is a malfunction of the particle accelerator, which places all of the injured parties in states of total or partial unconsciousness.

Jack Hamilton, the central protagonist, is dismissed from his job at the California Maintenance Labs due to McCarthy-era paranoia about his wife Marsha's left-wing political sympathies; this dismissal is instigated by security chief Charlie McFeyffe. Bill Laws, an African-American possessing a PhD Degree in Physics, is employed as a lowly tour guide for the Bevatron. Arthur Sylvester is an elderly political conservative and believer in an obsolete geocentric cosmology, derived from a schismatic Bábí offshoot. Joan Reiss is a pathologically paranoid woman, and Edith Pritchet is a maternal but censorious elderly woman. Her son David, along with Charlie McFeyffe, complete the eight-member tour group.

After the Bevatron fails, all eight members of the tour group are injured by a collapsing walkway and high levels of radiation. They awake to a world where miracles, prayer, and curses are common-day occurrences. Hamilton and Charles McFeyffe travel to heaven and glimpse a gargantuan eye of God. They discover that they are inside the mind of Arthur Sylvester and knock him unconscious, hoping that doing so will return them to reality. Instead, they continue to a different universe. The next universe is a caricature of Victorian morality in which Edith Pritchett has abolished everything which she considers unpleasant, and the third universe reveals the paranoid delusions of Joan Reiss.

Finally, the group arrives in a Marxist caricature of contemporary US society. The characters discover that that Marsha Hamilton did not create this world. Instead, Charles McFeyffe is revealed as a Communist who is using his position as chief security officer to further the ideals of the Communist Party.

After McFeyffe is knocked unconscious, the group believes they have returned to the real world. Jack Hamilton and Bill Laws form a small business that seeks advances in stereophonic technology. The disclosure of McFeyffe's Marxist allegiances is dismissed as unproveable. The novel ends ambiguously, as it is unclear if the group has returned to reality or is still living in someone else's universe. 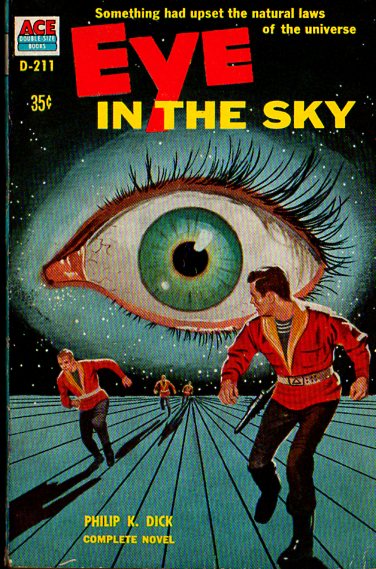 7
Scene from a PK Dick novel: a subjective world with a huge God-eye in the sky

7
Series with a book called Quest, about a sisterhood
8
A gateway to a new world/future where things can be improved with use
11
Fantasy novel, magic sword and different worlds
5
Cartoon about a group of teenagers whose souls travel to multiple worlds with monsters
18
Name a book of the 80s about a group of scientist/students being transported to a parallel universe
8
Fantasy book series about persecuted people with elemental magic powers
7
Novel about a young woman who discovers an underground city where they use books to create worlds
9
Looking for title of a sci-fi book about dystopian future with implantable devices