How did Fremen produce and carry enough thumpers to use Sandworms as de facto Ubers?

In Dune, Fremen travel regularly on the backs of enormous Sandworms (variously "Shai Hulud" or "the Maker"). They summon them through the use of a device called a "thumper" (presumably Frank Herbert didn't foresee smartphone apps) which is a metal device which bangs a heavy weight up and down causing vibrations which pisses off worms. A worm charges in to attack the thumper and while it is distracted, the Fremen climb aboard.

BUT - the thumper is destroyed every time. And even if it wasn't, the whole point is to distract the worm so you can mount, you wouldn't be able to climb back down and pick it up.

It just seems for it to make enough low-frequency noise to attract that kind of attention, its going to need to be at minimum the size of a bowling ball and have enough metal stake to poke into the ground (sand) deep enough to transfer the sound energy efficiently. Picturing 35 lbs at the very least.

And while the 1984 movie isn't necessarily canon, it did show thumpers as being pretty big as well.

I wouldn't want to carry ONE very far; let alone a half dozen for a long trip.

Additionally, the Fremen seem very insular and distrustful of each other and I find a thumper exchange philosophy, where one could stop at another sietch and borrow or buy one, to be very unlikely, yet they speak of long journeys as being "x" thumpers in length, which I understand to mean I had to summon x worms (which implies one thumper per trip-segment).

Where do they get all these thumpers?

We have a description of a thumper in Dune

Stilgar pulled a plastic rod about a meter long from beneath his robe. The thing was pointed at one end, had a spring-wound clapper at the other end. “I prepared this thumper myself. It’s a good one. Take it.”

and an image of one in the Dune Encyclopedia 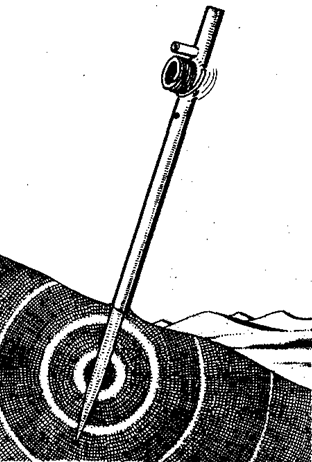 If you were planning to make a long journey, carrying twenty of them (between several Fremen or in a large bag) doesn't seem especially onerous given that they're made out of light spice-plastic.

I haven't read the book in a while but I recall that a long sandworm trip was usually undertaken by a large group of Fremen, so it wasn't up to one person to carry all the thumpers.

Also, as Valorum's Stilgar quote ("it's a good one") implies, not all thumpers are necessarily the same. The one Stilgar prepared was for a very special occasion, the first sandride led by Paul.

Not the answer you're looking for? Browse other questions tagged dune sandworm or ask your own question.

19
How did the sandworms/sandtrout appear on Arrakis?
28
The geography of Arrakis
14
How did Duncan Idaho become so familiar with the fremen
9
What does the word “thumper” mean when used to measure distance?
3
What happens to the sandworm after its riders release it?
27
How could the Fremen do what they did to the empire in Dune Messiah?
11
How did Paul 'sterilize' ninety planets, and why?
2
How did the Bene Gesserit reach Jessica and the Fremen unnoticed?
13
How did Arrakis become a desert devoid of oxygen and then habitable again?
6
How did anyone know the headless body found in the desert was Fremen?