Manga where all the characters were human/animal hybrids

I read this manga a while ago. All the characters were half-human, half-animal. The main character was half-human, half-crow, his main weapon was this hatchet-like thing attached to a chain that he would throw.

One of the secondary characters was a half-human, half-fish that was always trying to get the character to shut up and also super grumpy.

A second side character was a half-human, half-bear that was introduced when he killed someone because he couldn’t control his animal side.

A third side character that was introduced pretty late was a half-human, half-bat kid whose mom was killed by her dad and she lived because she was hiding in the forest.

Beings who possess animal-like powers walk among humans in this alternate universe. These mysterious mutants, the +Anima, are shunned by society. Four outcasts in particular — Cooro, a boy with crow-like powers; Husky, a fish-boy; Senri, a bear +Anima; and a girl named Nana, who wields the power of the bat — search for others like themselves while trying to gain acceptance in a world cruel to anyone or anything that is different.

In the Mukai's original short story, Cooro is much more violent, has wild behavior, and wields a small hatchet. 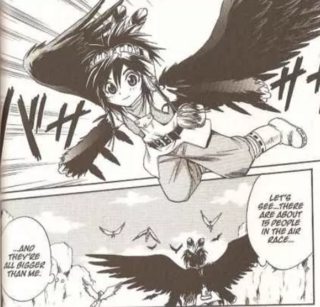 19
Book series about a future where gene-modified sentient animals were used as soldiers and are trying to find a place in post-war human society
6
Sci-fi book series about two orphan boys who are adopted and trained by two monster hunters
5
Manga with a god that sells dreams and a variety of god/animal characters
12
Anime about half-human girls who fight monsters?
6
Looking for an older maybe 20 year old Mech Anime
2
Manga with a boy whose father was murdered (but is still around), living with a demon girl with magic hair