What is the meaning of “flood the intake and sweep to the bi-lats”?

In Solo: A Star Wars Story (2018), Han is piloting the Millennium Falcon with Chewbacca.

Han: Drop the landing gear. When I tell you, flood the intake and sweep to the bi-lats. A little something I picked up from my pal, Needles, best street racer in all of Corellia. Till he crashed and died, doing this.

What is the meaning of "flood the intake and sweep to the bi-lats"?

Solo is most likely changing a fuel mixture and then restabilizing. 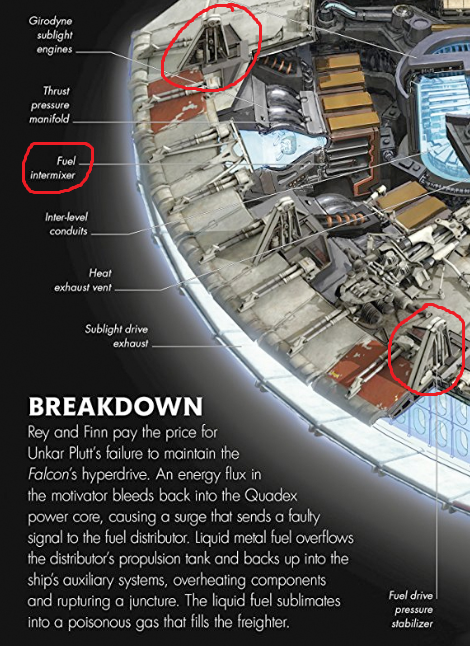 Flooding the intake, would analogous to a jet engine cause a change in the 'air-fuel'1 mixture of the sublight drive.

Suddenly changing the 'air-fuel' ratio of the Millenium Falcon, would, like in modern jet engines cause some instabilities and potentially stall the engine. One can assume that sweeping the bi-lats (potentially Bilateral Fuel drive stabilizers?) would compensate for this change, and allow for the sudden burst of speed.

The linked articles implies a low pressure behind the exhaust part of the drive could cause a stall, which would not be what you want. Equally, unstable 'combustion' (for lack of a better word) could also cause resonances in the engine and damage it beyond use (potentially what Needles did)

1. Or the spacefaring equivalent

Not the answer you're looking for? Browse other questions tagged star-wars millennium-falcon solo-a-star-wars-story or ask your own question.

0
What is the meaning of “The effort”?
12
What is the history of the front end modification to the Millennium Falcon?
11
What do we know about the future of this character?
13
How did Enfys Nest and the Cloud-Riders get from planet to planet?
5
What was the Marauder’s plan?
8
What are the scars on the face of Dryden Voss?
6
Did Han Solo shoot Darth Vader’s TIE Fighter wingman from the cockpit of the Millennium Falcon?
16
What's the meaning of “fortified infraction restraint”?