What happened to the Sith Emperor from Star Wars: The Old Republic?

At the end of the game what happens to the Sith Emperor? I know he doesn't die, but the game ends anyway. There is another novel coming out, but I don't think he's in it.

The Sith Emperor (also known as Lord Vitiate)'s last body was eventually killed by the Jedi known as the Hero of Tython. However, his spirit lived on, gathering strength until he could possess another body (communication from the Emperor's Hand to the Emperor's Wrath):

The Emperor's recovery continues. But while he slumbers, his Wrath is needed more than ever.

The Empire echoes with whispered rumors of the Emperor's weakness. was the first of many Sith to grow bold in our master's absence. Some even suspect the Emperor's death.

It is the duty of the Wrath to silence these rumors.

Show the Empire your incredible strength. Devastate your enemies in the Emperor's name. Only then will the transgressors bow to you in awe and renew their devotion to our master.

The Emperor's return approaches. Prepare for his ascendance, Wrath.

So we never really find out what happens to him, but it is assumed he never again rose to power since in the novel Darth Plagueis, Plagueis muses that Vitiate came the closest to achieving true immortality.

If you guys have seen the newest update to SWTOR, its revealed in KoTFE that Valkorion is Vitiate. The whole Eternal Empire was his big side project. The huge amount of time where Vitiate was absent from the Galaxy, hes doing stuff with his Eternal Empire

The Emperor returned to his original (sith pureblood) body. the emperor the knight faces is in fact the newly christened Voice after the sith warrior was forced to strike down the Voice (voss body) in the Nightmare lands. The knight's strong connection to the Light Side caused a vast surge of Light side energy to surge into his final blow in the duel with the Emperor causing it to fatally wound the Voice and causing the Emperor's essence to be drawn back into his original body where he is currently resting and regaining his strength.

If you read the first part you would realize the Sith emperor was killed by Darth Malgus on the clip for the beginning of the story. Also, on the Sith warrior storyline you meet the emperor witch is Darth Malgus.

Here is a game trailer where the scene gets set for the final showdown.

EDIT: Here is a bit more about poor old Vitiate. More to comme after may 4th (Star Wars day) 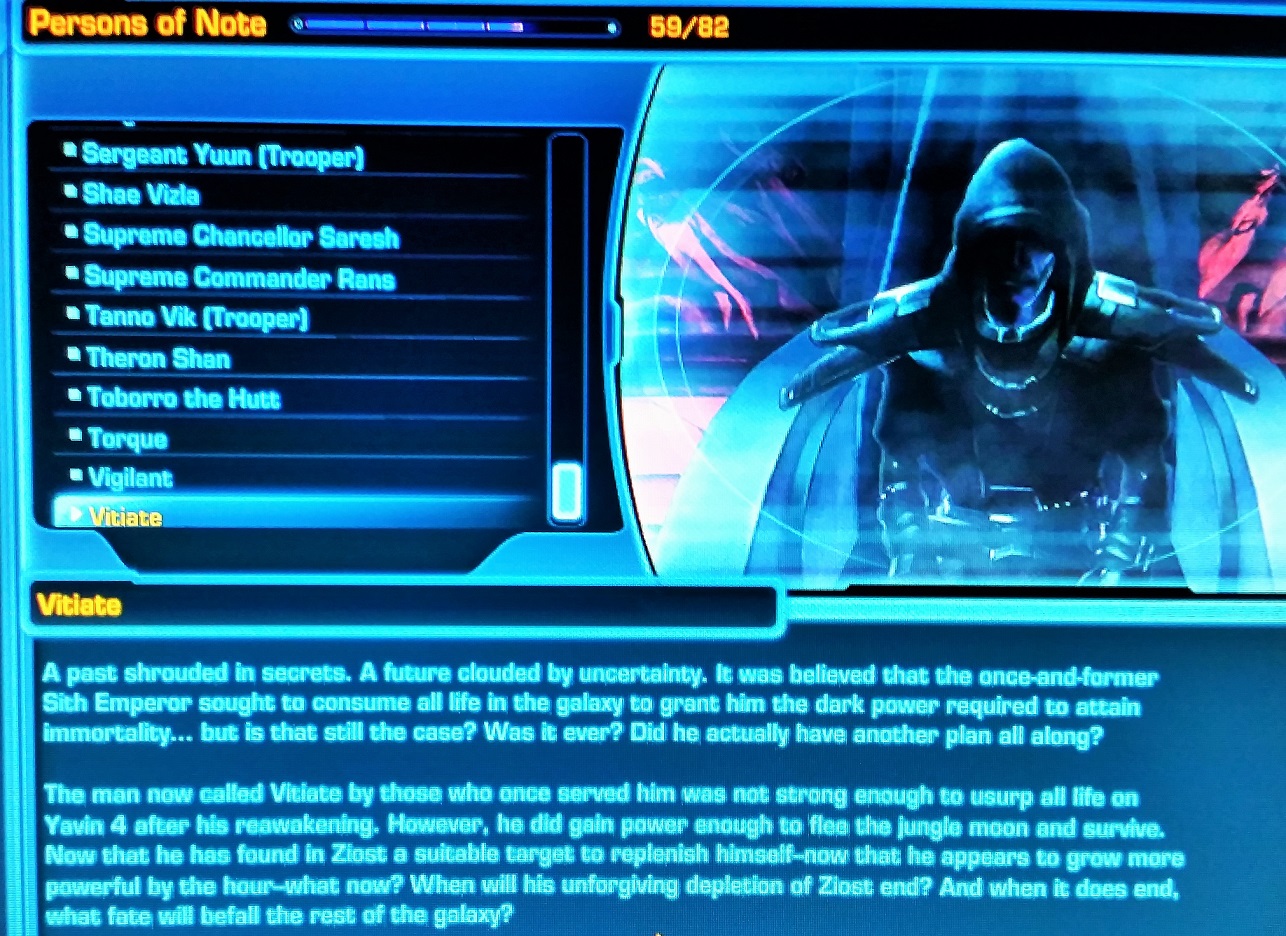 38
Why doesn't there seem to be any fallout from Sidious's lie to Vader?
16
What actually happens between Star Wars Episode III and IV?
7
What's the difference between “Sith” and “Sith Lord” in period in which the Star Wars movies take place?
18
Was Luke aware the Emperor was a Sith Lord?
4
Could the Republic survive without Sith?
6
Star Wars fanfiction where the main character is taken from Earth by a Sith, he later fights Ashoka