What is the purpose of ballistics tests in The Dark Knight?

In The Dark Knight, Batman removes a section a brick wall that contains a bullet. He takes it back to run some ballistics tests.

What are the reasons for the series of tests run here? Is the bullet so fragile that it can't be removed? Could it be contaminated if removed? Or has it already been shattered?

I think the ultimate goal is to recreate a fingerprint and identify who loaded and fired the gun. But shouldn't any fingerprint be on the case/shell which would either be in the gun or discarded on the floor -- and not on the actual bullet in the wall?

The goal of gathering physical evidence as a detective is to have the best possible chance of understanding what happened at a particular crime scene. In this instance, Batman gathers the entire chunk of wall because he believes it will be the best chance to acquire information from the bullet embedded in the wall.

Scientists have developed a technique for retrieving fingerprints from bullet casings and bomb fragments after they have been fired or detonated. The new method, which relies on subtle corrosion of metal surfaces is already being applied for the first time anywhere in the world by two British police forces.

The patterns of corrosion remain even after the surface has been cleaned, heated to 600C or even painted over. This means that traces of fingerprints stay on the metal long after the residue from a person's finger has gone. The Guardian, United Kingdom, June, 2008 - Fingerprints recovered from fired bullet casings

Granted it is a recent development but if we give Batman the benefit of the doubt for the use of bleeding-edge technology, we should assume he would be able to do this too.

Here is an example of how a print might be placed on the fired round, not just on the case. Note the placement of the fingers: 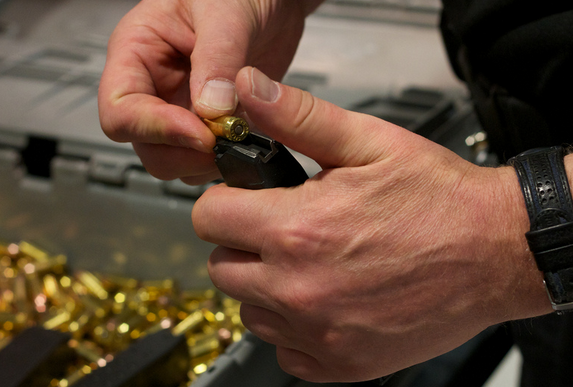 He [Dr. John Bond] has published details of the technique in the latest issue of the Journal of Forensic Sciences. In his paper he demonstrates that it is possible to recover fingerprints from a bullet casing ejected when a pistol is fired. "As you are pushing the magazine in you are actually putting a thumb print on the bullet," said Bond. "That's the person you want. That's the guy who loaded the gun."

Forensic ballistics involves analysis of bullets and bullet impacts to determine information of use to a court or other part of a legal system. Separately from ballistics information, firearm and tool mark examinations ("ballistic fingerprinting") involve analysing firearm, ammunition, and tool mark evidence in order to establish whether a certain firearm or tool was used in the commission of a crime. We don't know if he gathered any casings (or whether any were left behind) from the scene either.

Since we know caseless ammunition exists, Batman may have simply decided it was easier to take everything ensuring any fragments, because bullets sometimes shatter and are usually deformed once they hit something, are going to be close together, giving him the best chance of acquiring, in this case, a fingerprint.

Here is a diagram of the parts of a typical bullet.

There is also the fact issue of just how much of the bullet the print covers - more than is actually exposed in a typical bullet. So, this is either an exaggerated contrivance OR it could be that The Joker/a henchman assembled/inserted the bullet himself, deliberately planting a fingerprint on it for Batman to find and track down.

In most movies, I would go with the former, but with the elaborateness of The Joker's plots, the latter option is definitely plausible.

Is the bullet fragile that it can't be removed? Could it be contaminated if removed? Or has it already been shattered?

There's so many different situations that could've happened, it may or may not have shattered, but Bruce takes the precaution in case it could not be removed and preserved whole.

But shouldn't any fingerprint be on the case/shell which would either be in the gun or discarded on the floor-- and not on the actual bullet in the wall?

Not necessarily, have a look at: http://www.youtube.com/watch?v=5GIiQPSSoCs you can see that the bullet part of the round is handled and depending on how it is loaded could likely be the part that is pushed into the magazine.

Also, while the firing pin leaves its own "fingerprint" on the percussion cap of the shell, the rifling (the spiral inside the barrel that spins the bullet for stability) can also leave identifying marks.

The ultimate goal as a detective, would be to gather as much evidence from a crime scene as possible (e.g. calibre, particular manufacturer, rifling marks, a fingerprint, DNA etc.), not with the aim in mind for something specific as a fingerprint.

Bruce preserves a part of the crime scene and transports it to his lab to get as much of that data as possible to have the maximum chance to create leads.

The bullet was indeed shattered upon contact with the wall, but the fragments are still embedded within the brick.

According to the script, Batman is recreating the shot so that he can build a 3D template.

This template will then allow him to build a model of the fragments that he can manipulate to recover the fingerprint. The science is hand-waving at best, but it does explain what he's up to from an in-universe perspective. The overall scene is most likely intended to show Batman performing "detective work", which is an aspect of Batman often overlooked on film.

When he first extracts the brick sample at the crime scene:

BATMAN: I need ten minutes with the scene before your men contaminate it.

RAMIREZ: Us contaminate it? It's because of YOU that these guys are dead in the first place!

GORDON: Ramirez. (glances at her)

Ramirez stands down and steps away. Batman moves past the bodies to the wall. Finds an embedded stray bullet. He pulls a sawing device from his belt - thrusts it into the wall and starts cutting around the bullet.

GORDON: That's brick - you're gonna try and take ballistics off a shattered bullet?

Then later, in the temporary Bat-Cave:

ALFRED: I'm not sure you made it loud enough, sir.

As the wall samples still smoke, Wayne steps up, carrying the sample from the crime scene. Comparing its spread to the new samples, he selects two and carries them to an x-ray scanner. The machine samples a 3-axis scan. Hi-res 3D images of the bullet fragment arrays come up on the screen...

The same image of the bullet fragment on a screen. Fox hits a key and the computer "reassembles" the bullet according to the identifying grid on each fragment.

A bullet fragment array pops up on screen.

FOX: Here it is reverse-engineered.

WAYNE: And here's a thumb print.

So essentially, he was using an identical bullet to recreate the shot in the same kind of brick material, thus giving him a 3D "mold" of how the bullet fragments would spread out. This in turn gives the software a base model on which it can render the scanned fragments of the original bullet. The end result is a 3D model that you can manipulate & rotate on-screen.

Overall, this process isn't as far-fetched as it seems. 3D laser scanning is quickly becoming a favored tool of law enforcement, and there are numerous companies that work with a police department to scan crime scenes, thus creating a 3D scene which can be manipulated for alternative angles, bullet/splatter trajectory, etc.