How tough is Batman's armor in “The Dark Knight Rises”

I do not think that this is a spoiler at all, so here it goes: In the most recent of the Dark Knight series of movies, Batman wears a suit that looks very strong. Lucius Fox is even quoted as saying "... are you going to be encountering much gunfire in those caves" in the first movie, implying that it will stop a bullet. In this latest movie, Batman is shot at by a police officer whilst chasing down Bane, and it does not seem to faze him. However, in several fight scenes with Bane, he is punched and goes down pretty quickly. What is the durability of Batman's armor? My question could also be modified to: whether Bane has some kind of extreme strength or not. Does the gas he inhales have anything to do with this? He did have training in the League of Shadows...

Batman's body armor is designed to prevent penetration by bullets. As such it is strong, plated and resistant to normal small arms fire. It is reinforced at the chest, shoulders, hips, knees and elbows, to protect these vulnerable areas. It has an under armor padding at the places where no plates exist. This armor is less bullet-proof but offers some protection from hand to hand damage.

However, in a fight with a trained and skilled opponent such as Bane: 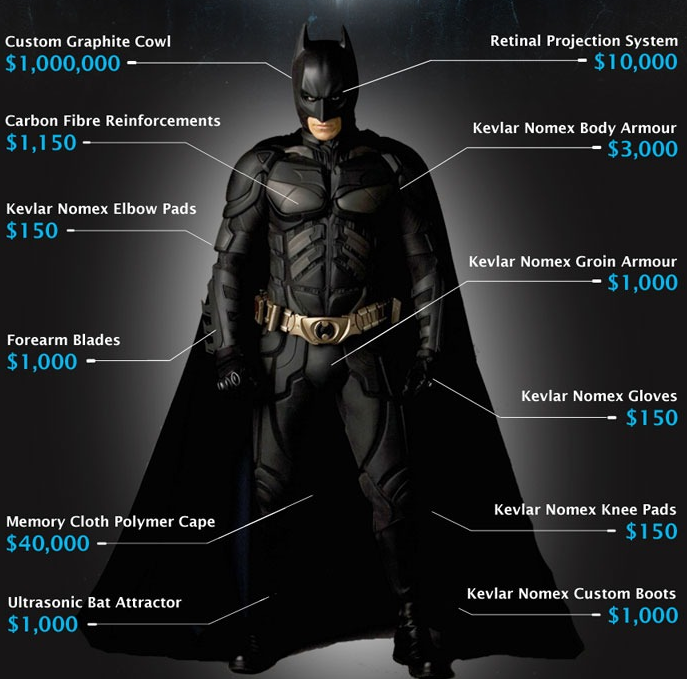 Image is part of a complete infographic regarding the total hardware cost of being Batman.

Based on Lucius Fox's "ceramic plates" and "Kevlar bi-weave" explanation of the Batsuit armor, it's safe to say that the Batsuit is identical to the materials used for making the IBA (interceptor Body Armor) and the IOTV (Improved Outer Tactical Vest) that the US Army currently uses. I am a Sergeant in the US Army Infantry and a veteran of both Iraq and Afghanistan and I will stand by this armor system as I have seen their use in the real world, with real people and real bullets. I believe I can lend a hand with the "Bane's punches do damage but bullets don't" (paraphrased) question.

-The ceramic carbonate plates used in the armor that we use is designed to withstand 3 rounds from and AK47 (a high velocity 7.62mm round) I have personally seen this armor withstand 5-7 rounds from these high velocity rounds and not puncture through. Harvey dent in the Dark Knight was seen using a pistol, a revolver that I will assume is a .38 Special. (simply on the build of the gun and how common the circulation of firearms of this caliber.) a .38 has nowhere near the penetrating power or kinetic energy of a 7.62mm. Thus the .38 Special will do little more than crack/dent the ceramic plates of the Batsuit

So in conclusion, Batman's superior training would allow him to keep his ceramic armor between Dent's bullet and his body, but Bane would have the martial arts expertise and raw power to cause damage to the "soft" Kevlar portion of Batman's armor.

Several modern impact resistant materials, mainly some experimental polymers based on no newtonian fluids, reacts dynamically to an impact.

Those type of materials become stronger on a direct proportion to the strength of the impact.

This means that when you shoot directly to the polymer it gains enough superficial tension to absorb the impact and totally ignore the bullet, but when you punch through it, your attack doesn't wields enough strength to activate it's resistance properties.

These materials are quite flexible and are probably the future of the bulletproof suits, but won't be very effective against hand to hand combat.