Fantasy book about a rock band saving the world from evil

The cover was jumbled but had (at least) a woman, a guitar, and spaceship on it.

Something evil was putting out rays that, like, really bummed everybody out. But the music of this rock band could counteract it. So, there was a long concert. But the band was getting tired. At the last moment, a dude shows up in a starship and the band "levels up" and saves the day.

I'm sure there was more to it, but I don't really remember. I think the starship shows up because they manage to summon it.

I think this may be Time of the Hawklords, credited to Michael Moorcock and someone called Michael Butterworth, but apparently written mainly by the latter. The cover is indeed jumbled up, with a woman, a guitar, and a spaceship. 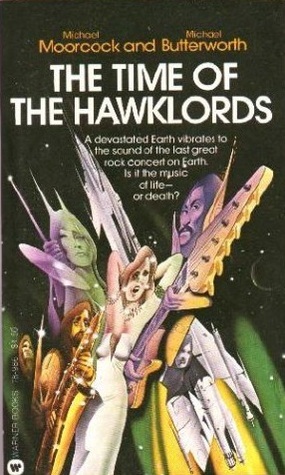 I admit that I only ever read a few pages of it, so I don't have much detail on the plot, but I do know that whatever good is done in the book (including any "saving the day"), the band Hawkwind and the music they play are integral to it. I also know that there is at least one live event with them performing, or about to perform before the alien invasion interrupts things.

From a ruined London on a burnt-out Earth, the Hawkwind group beams out its last, defiant concert. The Children of the Sun, the tattered remnants of the Hippies, gather to listen. But when the music ends, withdrawal symptoms begin—a dreadful, retching illness only the Hawkwind sound can allay.

This new malady may be more than debilitated mankind can withstand. Desperately the rock group begins research: first, with the few electronic instruments miraculously still intact; then with a book whose existence is an even greater miracle—an ancient, magical tome, The Saga of Doremi Fasol Latido, whose prophecies seem to be coming true.

It had two sequels

3
What novel by John Brunner features a rock band called "Girdano Bruno and the Hermetic Tradition"?
10
Identifying a fantasy/scifi series/book about abandoned colony/world
7
Fantasy book - Woman from our world winds up in a fantasy world, meets chosen one, beats him in singing contest and wins cup
8
Help me identify a 1980s trilogy of books about a space faring rock band
11
Book - Cats saving the world from a telepathic alien
2
Book about magic rocks, fire and guardian magics