Is Ghost's status known by the time of "Avengers: Endgame"?

In the post-credits scene of Ant-Man and the Wasp,

It's unknown whether Ghost was snapped as well. If she did, we know from Avengers: Endgame that

she's probably alive and in the state she left off, as all the people brought back didn't seem to have aged a day.

But if she did survive the snap,

she still hasn't received her quantum molecules cure, as Ant-Man was trapped in the Quantum Realm for five years. The way I understood it, her condition was pretty much in terminal phase before Janet gave her some of her quantum energy. Five years without quantum chemo might have brought her back into serious illness/death/disappearance.

Has anyone from Marvel (Kevin Feige or other) commented on her status? I did find this interview, but the actress only says that "she didn't disappear into thin air, did she?" which doesn't mean much, as it could refer to either Ghost's powers or the snap.

For a further update here, and still inconclusive, Marvel have since published an article on their website. It doesn't actually address what happens to Ava but frustratingly leaves it with "but that’s a story for another time". This doesn't really answer the question either way but presumably the wording means she doesn't just die and that's it.

After Janet Van Dyne is rescued from the Quantum Realm, she can sense Ava’s unstable state and is able to partially heal Ava with some of her own quantum energy. Scott eventually goes back into the Quantum Realm to collect quantum healing particles just for her, which of course was mere moments before the Blip happens and he gets stuck there for five years, but that’s a story for another time.

Marvel, A Ghost Story: The Tragic Circumstances of Ava Starr

Hannah John-Kamen has done a more recent interview with Yahoo Movies UK since I posted this answer. In it she says the following:

She told Yahoo Movies UK: “In the MCU, you have to sign your contract with blood and they stitch your mouth together.

“All I can say is that Ghost didn't die.”

Yahoo, Hannah John-Kamen says we could see Ghost again in the MCU (exclusive)

So Ghost is apparently alive according to the actress but that is as much of a confirmation we have so far. However, her wording is also not very clear as to what she survived and for how long etc. though the question she is replying to is asking if we'll see Ghost again. Of course this is word from the actress though so it isn't exactly official.

I've been thinking about this question for a while and periodically looking for new information but have yet to find anything explicit on this. However, I think we can assume she was Snapped and so only came back at the end of Avengers: Endgame after the 5 year gap.

In the post credits scene for Ant-Man and the Wasp we see Scott, Janet, Hank and Hope setting up the machine to jump into the Quantum Realm and Scott going in. Janet, Hank and Hope are then Snapped leaving Scott trapped in the Quantum Realm. Scott is later released after the 5 year gap by a rat stepping on a button and nothing intentional. However, they were gathering the quantum particles for Ava and so she and Bill would likely have known where they were. It stands to reason then that after the Snap had they survived they would have gone to try and see what happened and brought Scott out so the particles could be used to help Ava. As this didn't happen I think we can assume they were both Snapped.

However, even if they weren't Snapped I would argue that she would still have survived. Janet already healed her when she came out of the Quantum Realm and they aren't in a rush in the post credits scene meaning it isn't exactly a time sensitive issue like it was before. She originally only had around two weeks to live and Janet seems to have stabilised her.

Ava: How long have I got?

Bill: A couple of weeks, maybe.

Ant-Man and the Wasp

Ghost seems to have survived 20+ years by the time of Ant-Man and the Wasp when her time has all but run out and then is stabilised by Janet. This means that if what Janet did was really powerful and "reset" her she could survive another 20+ years and they were only going to get the particles just to help maintain her condition and so she wouldn't be in constant pain rather than trying to heal her completely.

Now for some speculation on future events. I don't know much about the Roger Wardell twitter account other than it went viral for supposedly predicting some events that happened in upcoming films. I'm not sure if it is an accurate source for leaks or if it was like those World Cup accounts that predicted every outcome and then deleted the ones that didn't happen making it look like they knew the future.

That said the account has tweeted that there is a Thunderbolts film in the works and that it will feature Ghost. However, Marvel have yet to comment on this from what I can tell. But their silence on commenting about Ghost at all could be taken as evidence that there is something in the works for her depending on how you look at it.

@RogerWardell: Don't worry, Marvel still has big plans for Zemo, Ghost, Justin Hammer, General Ross, and the Abomimation. The Leader is being discussed to return as the main villain of Thunderbolts, which is being planned as a trilogy. 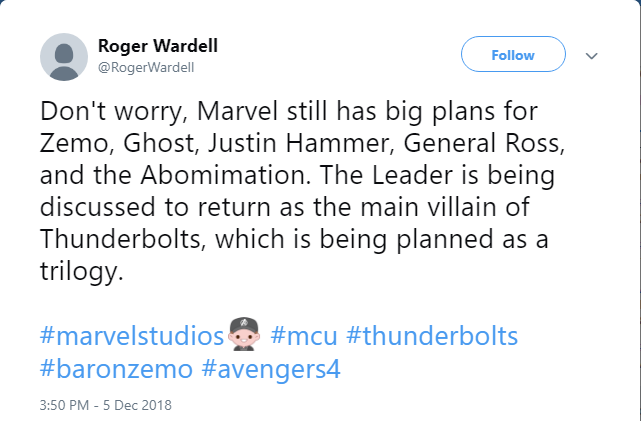 Hannah John-Kamen, Ghost's actress, has also stated that she'd be up for a Thunderbolts movie if one were to come out so she certainly hasn't ruled out the possibility of a return for Ghost.

Screen Rant, Ant-Man & The Wasp Star Would Love To Do A Thunderbolts Movie

My personal belief is that unfortunately; she died. Janet did transfer her some Quantum Energy, just enough to keep her molecular structure stabilized; but they also intended to come back from the Realm with more to heal her further. But with The Snap occurring shortly after and Ant-Man being stuck in the Quantum Realm, I believe the worst happened and her molecular structure completely de-stabilized by the time the events of Endgame played out; becoming another one of Thanos’ “unintended” victims.

LordRahl95LordRahl95
1
1
Add a comment  |
Highly active question. Earn 10 reputation (not counting the association bonus) in order to answer this question. The reputation requirement helps protect this question from spam and non-answer activity.

18
Why is Hank Pym so obsessed with ants?
31
How did Ant Man breathe when he shrank down to sub-atomic level?
3
Is Janet van Dyne’s movie storyline similar to any comics?
8
Was Janet Van Dyne actually visible in the first MCU Ant-Man movie?
10
What is the status of the Infinity Stones post Avengers: Endgame?
2
In Avengers: Endgame, is the Time Stone in the wrong place?
3
How does time work in "Avengers: Endgame"?
7
Why are Hope and Janet's surname's van Dyne and not Pym?
29
Why does the Quantum Realm behave different for Janet van Dyne than for Scott Lang?