Does The Ancient One's explanation create a paradox?

In Endgame, it seems that the Ancient One's explanation of

time-travel, and something I believe Hulk and Tony alluded to as well, is that going back in time does not change what has already happened, but merely creates a new, parallel universe, so that "time" is now shaped like a horizontal Y, that shoots off in two directions. This happened in the movie when Thanos travelled to the future and got snapped, since here now exists a timeline where Thanos no longer does his original snap.

this seems to create a paradox, because if we go back in time to the section of the time which is still linear, where does that time-line end up? In the newly created timeline or the original time-line?

See this drawing below (SPOILERS):

This is very similar to the imagery created by the Ancient One when talking to Hulk. The blue line represents time, which splits into two parallel lines. For example, the lower line could represent the original time-line where everything happens as we have seen it in the movies. The upper line could represent the time-line of the universe where Thanos, Nebula, and his entire army no longer exist, since they travelled to the future and got snapped. So, now imagine you are living at the time-point indicated by the red cross. Where does a person living in this time-line end up? The upper or lower time-line?

Your mistake is in thinking time stops being linear.

Rather than the branch of a tree, consider a section of railway track.

No matter where you are on this track, the origin and the destination are the same. It's linear.

Now, let's do something drastic, like take the Time stone out of this track's reality. 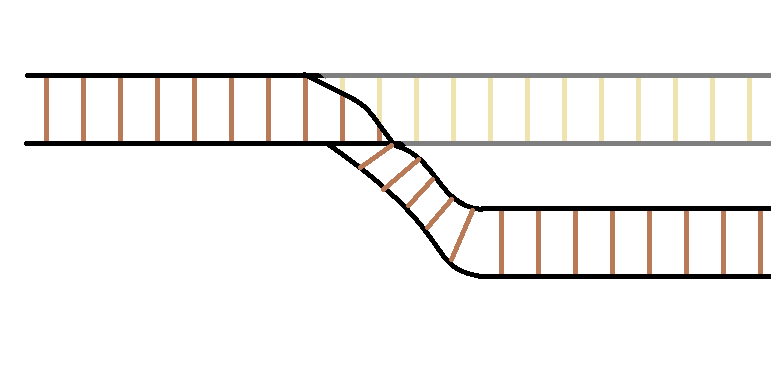 This is equivalent to flicking a switch, and changing the track's destination. The path is still linear. You can't get to (or start on) the gray section of the track because it will have never existed, which means no matter where you are on this track, the origin and the destination are still the same. (The destination has been altered, but the track itself is still the track).

The Ancient One's concern was that her ability to protect Earth would falter because she had "looked ahead" at the track before the switch was thrown. This is why returning the stone, i.e. "flipping the switch" twice, is ultimately an acceptable compromise to her.

Based on the fact that the plot explicitly rejects the

Back To The Future based time travel mechanics,

Safe to say that they would end up

in a new reality, where Thanos and co. time travelled to the future, got snapped off, and hence timeline 1 never occurred anymore. This has no tangible effect on the new timeline. What the ancient one says is, as long as the infinity stones are not moved away from their original timelines, there will remain only one timeline. The "Y" will occur only if an infinity stone is completely removed from its own timeline, which is why in the end Cap travels back to the past and places all the stones at their appropriate locations.

Q: Where does a person living at the red-crossed point end up? The upper or lower time-line?

A: Both. When a new timeline comes into existence, it copies everything from the original timeline.

There's no paradox here. Unless a person jumps across time to switch timelines, he/she will continue to exist in both timelines.

10
What is the status of the Infinity Stones post Avengers: Endgame?

38
Would the Ancient One have defended the Earth from a Chitauri invasion in the Avengers absence?
29
How did Doctor Strange see the winning outcome in Avengers: Infinity War?
18
Is there now a universe without Thanos?
10
What is the status of the Infinity Stones post Avengers: Endgame?
13
Did Steve come back on his own in "Avengers: Endgame", and if so, how?
3
How does time work in "Avengers: Endgame"?
10
What are the rules and logic for time travel set in Loki?
1
When does the sacred timeline split in the MCU timeline?