When I was in my teens, so it must have been in the seventies, I read a science fiction story (I do not remember whether it was a novel or a short story) that contained a displayed mathematical formula. I remember it as looking like an infinite sum of a series of fractions, but when I showed it to my math teacher he pointed out that that did not make sense (the result of the formula interpreted as a series could not have been rational? or maybe it would be divergent? something like that), and that it was supposedly an infinite continued fraction that the publisher did not typeset properly.

I think it might have been a formula by Ramanujan, but I do not remember whether the story named Ramanujan explicitly, or that we recognised the formula as something like that ourselves (I would guess the latter).

Probably "Gomez", a 1954 novelette by C. M. Kornbluth, available at Project Gutenberg Canada. The image below is from New Worlds Science Fiction #32, February 1955 (available at the Internet Archive): 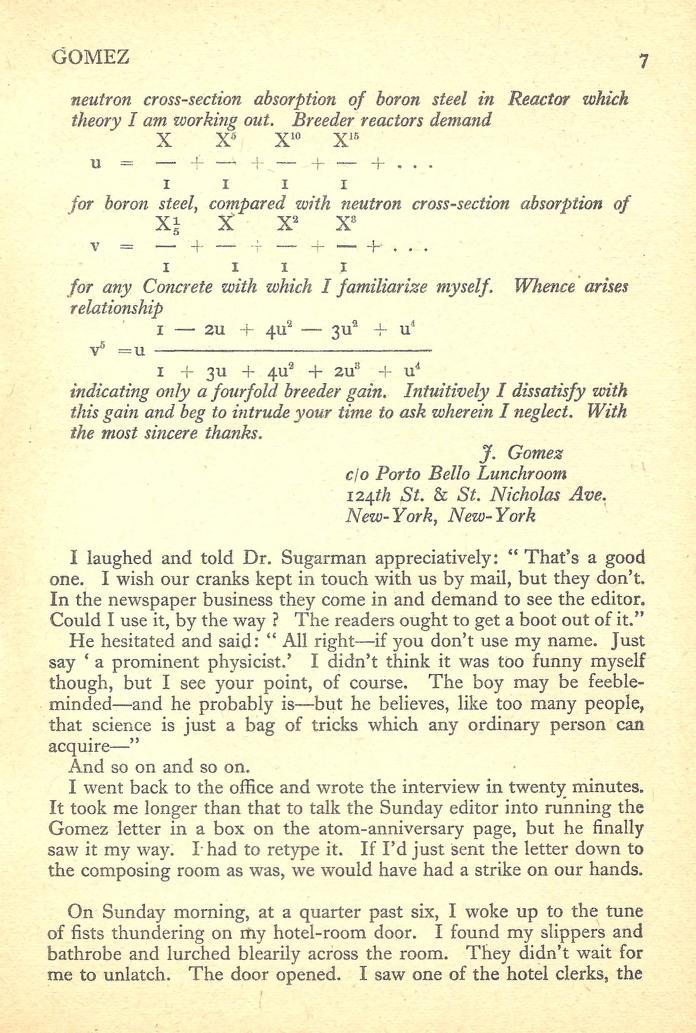 this story is about a physics prodigy, but a mathematical equation appears in it -- the first time I read story the equation didn't make any sense to me, but eventually I realized that it was a continued fraction -- only much later did I discover something that isn't mentioned in the story: this equation was one of the results that Ramanjuan cited in his initial letters to Hardy!

Ramanujan is mentioned explicitly in the story:

"It's happened before, admiral," said Dr. Mines. "I don't suppose you ever heard of Ramanujan?"

"Oh. Well, Ramanujan was born in 1887 and died in 1920. He was a poor Hindu who failed twice in college and then settled down as a government clerk. With only a single obsolete textbook to go on he made himself a very good mathematician. In 1913 he sent some of his original work to a Cambridge professor. He was immediately recognized and called to England where he was accepted as a first-rank man, became a member of the Royal Society, a Fellow of Trinity and so forth."

Not the answer you're looking for? Browse other questions tagged story-identification mathematics or ask your own question.

9
Time travel story where the travels happen in groups accompanied by guides, for recreation or research

4
Story where people were convinced a disaster would shortly befall the Earth
7
Novel or series about mages/magi and colored auras?
10
Sci-fi book, blue critters than only some people can see, kids fight the critters as they feed off energy and are a threat
7
Story set inside a sphere
9
Archaic short-story with two men, one a railroad switch operator. Supernatural warning apparition
10
Story with multiple 'third planet' races
17
Trying to identify a novel I read as a child about a dystopia with social classes and high-security prisons