Has Iron Man ever had a suit without flight, and if so, how effective was it?

In the movies and cartoons (and presumably the comics), one of the major advantages Iron Man has is flight. Most superheroes have it, actually. Even the Mark 1 prototype (in the movie) has a limited ability of flight that Tony uses to escape.

Tony is able to get away with anything by being able to get away from anything. Air superiority allows him to hold off the government from forcing to reveal his tech, and it's also a major contributing ability when he fights villains.

How effective would an Iron Man suit without flight be? Are there any episodes, movies, or comics where Iron Man doesn't have flight capabilities? Any where he loses them temporarily or permanently?

In the 616 (comics) universe, his first two armours (the MK I & MK II) had air-pressure boot jets.

At least one of the hydro armours had a built-in inner escape suit. This escape suit had limited capabilities, so probably not flight capable.

It's hard to say how effective the MK I was. On one hand Iron-Man won several battles, but on the other, there weren't many other people using flight capable exo-suits at the time. Flight was also one of the first upgrades the Iron-Man armour got.

In the Avengers Assemble episode "Savages" (Season 1, episode 17) Tony Stark has "Stone armour" which he used to fight dinosaurs. This armour didn't have rocket thrusting boots and was literally a martial arts suit. 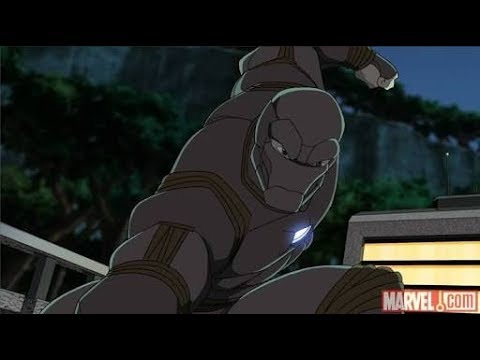 It came from Captain America challenging Tony to go without his tech for a full day.

Not the answer you're looking for? Browse other questions tagged marvel movie comics cartoon iron-man or ask your own question.

11
How is the Iron Man platform capable of maneuvering in flight?
26
Can Iron Man recharge his suit from lightning?
13
Has Tony Stark ever “gone commando” in the Iron Man suit?
19
How can Hank shrink without his Ant-Man suit?
13
Who was the first Hero to reveal his secret Identity to the public?
4
In Iron Man 2 why was Vanko's suit able to match Tony's?
16
Has Iron Man made any suit for underwater combat?
8
When was the first time Iron Man incorporated Heads Up Display (HUD) into his suit?
0
How much does the Iron Man Mk 1 suit weigh?