Looking for a book from the 80-90s. Earth has been infected by alien life forms, sort of seeded. The planet has been transformed, and a group of humans are fighting it, I believe they were a military hold over.

There was a lot of sexual innuendo, with the characters having to traverse through a giant "sphincter" to get to the heart of the invasion to attack, and humanity has shifted to more of an androgynous/bisexual side.

The main character, however, is a man's man, not interested in that lifestyle, and actually has an interest in one of the lead females, part of the team.

This is The War against the Chtorr series, by David Gerrold.

The Earth has been seeded, by means unknown, and there are several Chtorran infestation all over it. Not enough to completely alienform the planet, but enough that the military saw the writing on the wall, while far from the "front lines", life goes on more or less as usual, while soldiers fight and die to drive the aliens back.

This sense of impending doom has indeed driven society towards a more hedonistic and sexually dishinibited outlook - "drink, sing and be merry, for tomorrow the Chtorr might eat us". 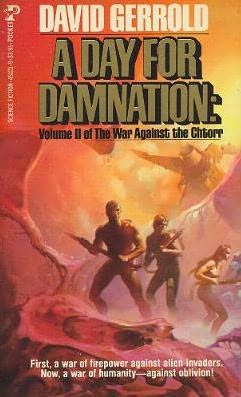 There are several sphincters throughout the novels - the larger Chtorr's eyes, mouth and, well, the rest are all designed that way apparently. The Chtorr are similar to Dune sandworms, but way smaller, and definitely hungrier. Eating jokes are sprinkled through the series (I half-remember one or two about Chtorr and lawyers).

When it was closed, it looked like a sphincter; but when it was open, it was hideous-it was a maw, a grinding hole, a pit. Nothing godly was responsible for this beast.

The scene you describe is somewhere in book 3 when the main character manages to get inside a Chtorran "nest".

9
Book: The main protagonist is transformed into one of the non-humanoid aliens
6
80s/90s book where boy stumbles on game where aliens gamble their planets
6
Book Identification - Children's sci-fi book about videogame aliens
7
80s (or earlier) sci fi book, humanoids bossed around by aliens